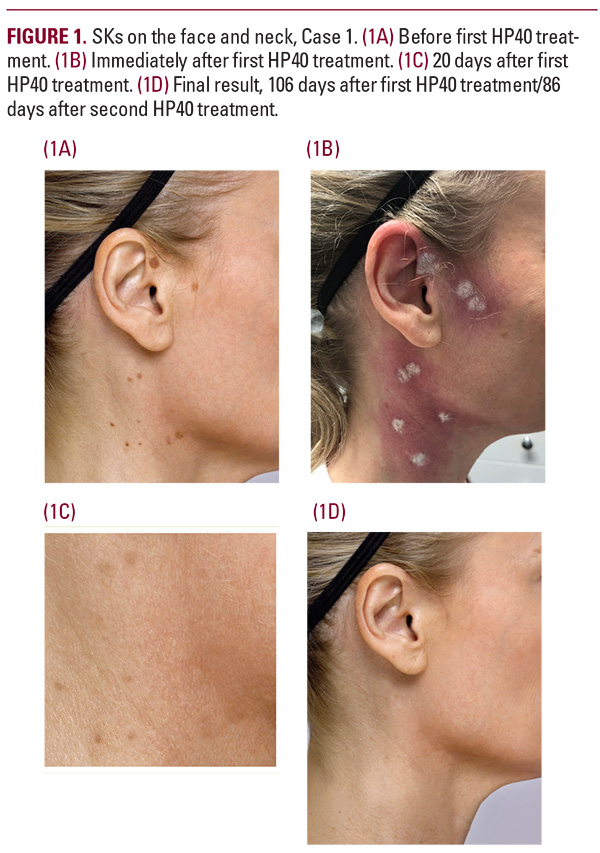 erated but the authors did not discuss the risks of pigmentary changes or scarring. Larger studies are needed to further examine BL-5010’s safety and efficacy. Another new therapy is a stabilized, high concentration hydrogen peroxide (40% H2O2) solution (Eskata™, HP40), which is the first FDA-approved topical therapy for raised SKs.26

HP40 is applied topically with a single-use, disposable applicator pen that can be used to treat multiple SKs in one setting (up to 10 if the SKs are small based on the author’s experience). Per the manufacturer’s protocol, the H2O2 solution is rubbed onto each SK in a circular motion to uniformly coat the surface. This process is repeated three additional times for each SK, separating each application by approximately one minute. After three weeks, another treatment may be needed if the SKs do not completely disappear. The efficacy of HP40 for the treatment of four SKs per patient was examined in two Phase 3 trials (n=937). Compared to vehicle, 1-2 applications of HP40 resulted in a higher mean per-patient percentage of clear/nearly clear SKs (51% for HP40 versus 7% for vehicle).26 A further sub-analysis showed that the percentage of clear/nearly clear SKs was higher for the face (65%) than for other locations (46% for trunk, 38% for extremities).27

In this case series, we present two patients who received in-office treatment with HP40 for SKs located on their face and neck. This novel topical therapy resulted in positive therapeutic outcomes for both patients presented. Further, we will discuss practical considerations for using HP40 based on the author’s experience with this product.

A 52-year-old Caucasian female with Fitzpatrick Skin Type II presented for treatment of numerous SKs on her face and neck. A few years ago, she received treatment for SKs located on her neck with cryotherapy, but she was disappointed with the hypopigmented scars left behind. The patient was deemed to be a good candidate for HP40 treatment given she had a previous negative experience with cryotherapy and had multiple lesions in cosmetically-sensitive areas. A total of 9 SKs on her face, hairline, and neck measuring from 5 mm to 1.2 cm (Figure 1A) were treated with one HP40 pen according to the product’s protocol (Figure 1B). The patient was evaluated 20 days later and given the presence of residual disease (Figure 1C), all 9 SKs were re-treated following the same procedure. The patient was seen again 106 days after the initial treatment; complete resolution of all the SKs was appreciated on exam (Figure 1D) and the patient was happy with the outcome.

A 37-year-old Hispanic male (Fitzpatrick Skin Type IV) presented for treatment of several dark, painless lesions on his face that were bothersome in appearance and grew slowly over the past several years. On exam, the patient had multiple well-defined, brown, raised papules measuring 4 mm to 8 mm on the right side of his face, consistent with SKs (Figure 2A). Considering the location of the SKs and the patient’s skin type and age, topical treatment with HP40 was recommended. The SKs were