measured as %dose/cm/h) compared to CP solution, CP cream, CP emollient cream, and CP lotion using a Franz chamber assay model.11 Other examples are the differences in potency rankings based on vasoconstrictor assay with betamethasone dipropionate 0.05% (BD) when incorporated in specific vehicles that utilize different bases and admixtures of excipients.15,16 High concentrations of propylene glycol are often utilized to produce augmented potency formulations of TCS, including some ointments, creams, and lotions ranked as ultra-high potency TCS.2-4,14,17 Not All Foam Vehicles Are Created Equal The development of different foam vehicles and their associated clinical characteristics have evolved over time. Foams were first popularized in dermatology with the emergence of a specified technology (Versafoam®) used to develop a platform of foam vehicles that were substantiated by research that demonstrated optimized cutaneous penetration of active ingredient (usually a TCS) using a freshly-harvested ex vivo human skin model.11,18 These foams were initially marketed in the United States with the release of “quick break” hydroethanolic-based foams, such as betamethasone valerate 0.12% foam and clobetasol propionate 0.05% foam studied in plaque psoriasis; these foams quickly liquified upon contact with the skin and tended to be drying and cause local tolerability issues due to the high content of ethanol.19-21 Hydroethanolic foams were followed by the development of emollient foams that incorporated “barrier friendly” excipients such as petrolatum, with ethanol removed as an excipient; these modifications allowed for “slow break foams” that did not immediately dissolve on skin contact, were easily spread into the skin manually, were not associated with a drying effect due to absence of ethanol, and exhibited a decreased potential for skin application site reactions such as stinging and burning.10,22 The lower potential for application site reactions is particularly relevant in patients with eczematous, xerotic, excoriated, and/or acutely inflamed skin. Formulation differences between foams and the clinical characteristics of the underlying skin disease being treated can both influence which foam vehicle is preferred and is thus more likely to lead to improved adherence with use.1,3,5,13,23 Although the initial focus with development of foam vehicles usually incorporated TCS as the active ingredients, advances in foam technology led to the development of aqueous-based foams and aqueous-based emulsion foams, which are devoid of ethanol as an excipient.24-27 These foam formulations are similar, exhibiting lack of drying effect and favorable skin tolerability, with some modifications of their excipients that allow for optimal compatibility with different active ingredients. Specifically, tazarotene is incorporated into an aqueous-based foam and calcipotriene is incorporated into an aqueous-based emulsion foam.24-27 As with the other foams described above, these aqueous-based foam vehicles do not contain fragrances, which reduces the risk of allergic contact dermatitis.19-27 Another advantage associated with both types of aqueous foams and emollient-based foams is low potential for cutaneous irritation. This is due to the absence of short-chain alcohols such as ethanol, and inclusion of excipients that exhibit a low risk for contact irritancy and/or contact allergy. Although head-to-head studies are lacking overall, data from studies with topical calcipotriene 0.005% completed in the same disease state (plaque psoriasis, scalp psoriasis), all demonstrate efficacy in pivotal studies, with a lower rate of cutaneous irritation reported with foam vehicle (2% [body]; 4% [scalp]) than with ointment or cream (10-15%) or with scalp solution (23%).24,28-30 Interestingly, the foam vehicle of azelaic acid (AzA) 15%, which utilizes a different vehicle platform that is ethanol-free and highly lipid based, appears to exhibit a more favorable skin tolerability profile than what has been reported with AzA 15% gel, based on results from pivotal trials of adult subjects with predominantly moderate papulopustular rosacea.31 To summarize, based on the available evidence, the hallmarks of all foam formulations incorporating Versafoam® technology are penetration of active ingredient through the stratum corneum with permeation into epidermis and dermis, ease of spread with lack of residue, adaptability to both hair-bearing and non-hair-bearing anatomic skin areas, and high acceptance among patients utilizing these therapies.10,11,13,18,24-27,32,33 Table 1 depicts specific foam formulations incorporating different active ingredients and excipients that contribute to the clinical attributes of each product. The next sections of this article will discuss data on calcipotriene 0.005% foam for plaque psoriasis and tazarotene 0.1% foam for acne vulgaris followed by “take home” concluding suggestions on clinical applications. 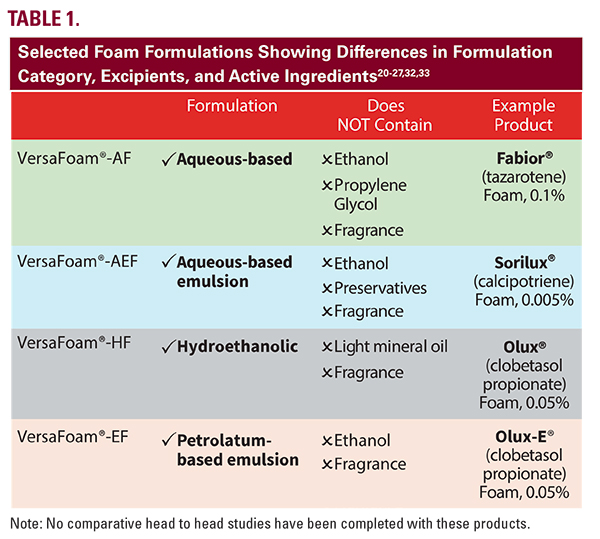