of its actual inclusion level. Figure 1 shows the ingredient lists of a standard body lotion and a high oil body cream.Whereas deciphering the ingredient levels from an INCI is not easy, insights into a formula can be gained by understanding certain principles that apply to all moisturizers. First, in both lotions and creams, water is often the first ingredient. Typically, a lotion contains more water-soluble moisturizers, which are typically humectants. In a cream, occlusives and emollients tend to be the primary moisturizers. Though this is generally the case, it is not always. For example, the first three ingredients of a highly recommended body cream, CeraVe™ Moisturizing Cream, are: purified water, glycerin, ceteareth-20, and cetearyl alcohol. This product is not a cream in the above sense since oils and occlusives do not fall among the first four ingredients on the INCI. This is one example among many that demonstrate that just because a product is labelled a cream and is in a jar, it should not be assumed to be high in occlusive and emollients, and as described below, it is not necessarily more moisturizing. The INCI needs to be examined to gauge whether the product truly meets the need for which it is being recommended.Another general guide is that polymers, fragrances, preservatives, colorants, and dyes are often present at levels <1%. Since many functional ingredients are efficacious at levels >1%, if a product promotes an ingredient, a user may be well served by ensuring that the promoted ingredient is listed before these ingredients on the INCI. While this is a general rule, there are exceptions such as retinol, which is typically formulated at around 0.1%.Common Ingredients: Benefits and Issues In a standard moisturizer, one can find several classes of ingredients: moisturizing ingredients, emulsifiers, polymer/ thickeners, sensory modifiers, and preservatives. In addition to these ingredients, there are often advanced benefit ingredients as well, such as anti-oxidants, vitamins, lipids, or sunscreens. In the sections below, we elaborate on these ingredients with details on usage levels and conditions required for efficacy and watch-outs. Humectants are hygroscopic conditioning agents containing multiple hydroxy (-OH) functionalities (Figure 2). By their chemical nature, they attract and bind water. They are water soluble, which means that while they are key moisturizing ingredients in leave-on formats, they are not easily retained on the skin from wash off products like cleansers. The most common humectant is glycerin.Glycerin can be found in most moisturizers – whether face or body, lotion, or cream. The level ranges generally from 1% to 25% or more with the maximum improvement in hydration seen between 20% to 40% depending on the chassis.7,8 Beyond hydrating the skin surface, glycerin has been proven to aid in barrier recovery including the stratum corneum integrity, cohesion (UL), and mechanical properties.7 Glycerin has also been shown to enhance desmosomal degradation.9 Occlusive ingredients in skin care products help regulate water in the stratum corneum by preventing excessive water loss from the surface of the skin to sustain a moisturized environment. They are by nature not 100% occlusive but allow for the transfer of water that is necessary for normal skin function.10 A consequence of this increased water content is that it accelerates barrier recovery.10 Most occlusives do not contain hydroxy functionalities in their chemical structure, so they cannot bind water. However, since they form uniform hydrophobic films, they effectively seal moisture into skin.The most common occlusive is petrolatum or petroleum jelly. Petrolatum is a highly refined blend of short and long-chain alkanes (Figure 3), microcrystalline wax, and mineral oils, and is a semi-solid at RT. When rubbed onto skin, petrolatum liquifies and penetrates the stratum corneum where it re-crystallizes forming a strong interstitial occlusive system (not as superficial as is commonly thought), substantially decreasing transepidermal water loss.10 At the same time, according to our testing on Vaseline jelly, petrolatum is non-comedogenic. Other occlusives include high molecular weight mineral oils and dimethicones (Figure 4).Emollients are materials such as oils and lipids that are water insoluble but do not form an occlusive film. In some cases 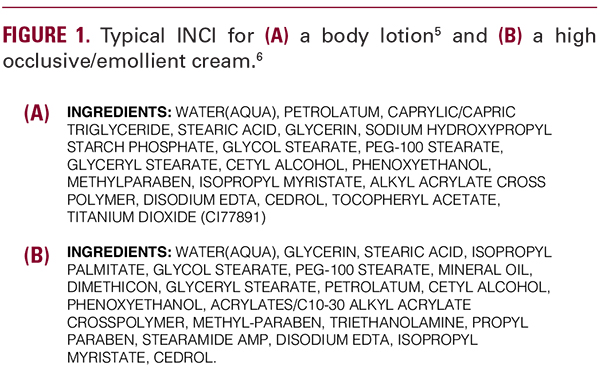