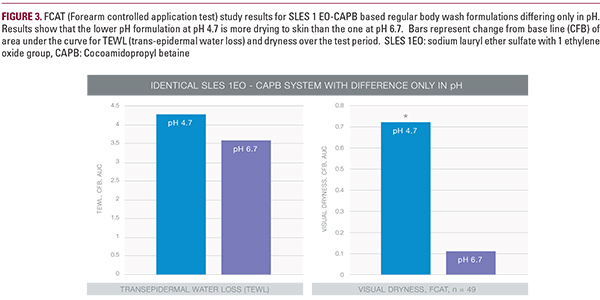 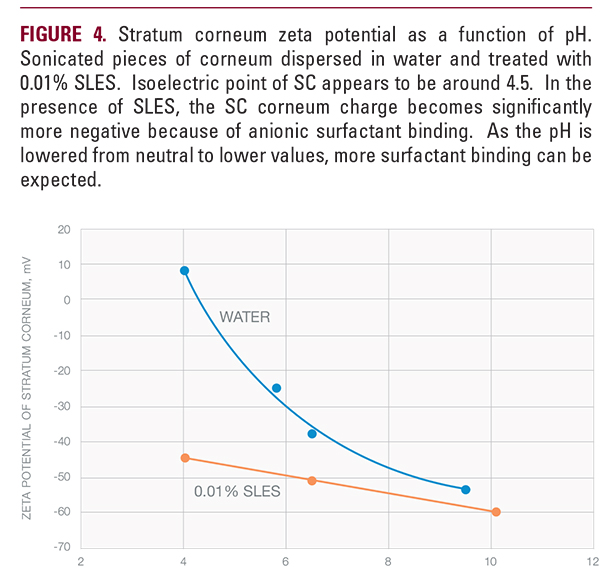 Role of Fatty Acids in Skin Mildness An approach to minimizing the tendency of surfactants to cause delipidization and the consequent skin dryness has been the incorporation of fatty acids in the formulation.12,28,40 This stems from the hypothesis that fatty acids and cholesterol are the surfactant-extractable lipids in the SC and, between the two, fatty acids are more extractable. Incorporation of fatty acids can prevent extraction of medium chain fatty acids from skin as well as replenish fatty acids that are likely to be removed during the cleansing process.28,40 Figure 5 reproduced from reference 12 shows how addition of stearic and palmitic acids improves the relative reduction of TEWL and visual dryness in an FCAT clinical study even in a relatively mild isethionate surfactant system.12 In addition to modulating the harshness of cleanser surfactants, fatty acids may also provide other skin benefits and this aspect will be examined in a later section.Moisturization from Cleansers Moisturizing cleansers are designed to provide positive skin benefits beyond simple mild cleansing. Typically, these are measured as increased hydration levels and reduced visible skin dryness and transepidermal water loss in comparison to starting conditions. These are typically achieved by depositing “oily” materials such as petrolatum or triglyceride oils often in combination with humectants such as glycerol4,9,41 and such deposition provides an immediate visual dryness reduction benefit.There are products in the marketplace that emphasize both mildness and moisturization and others that emphasize more on just moisturization. The rationale behind the use of a strong moisurization system with less regard for the mildness of the cleanser base is that the former can overcome the negatives of the harsh base while maintaining its overall sensory properties. Our hypothesis, based on previously published research on cleanser mildness, is that both of these elements are critical for superior skincare from cleansing systems.42 It has also been shown that it is possible to create ultra-mild systems without any compromise on sensory properties.12,13