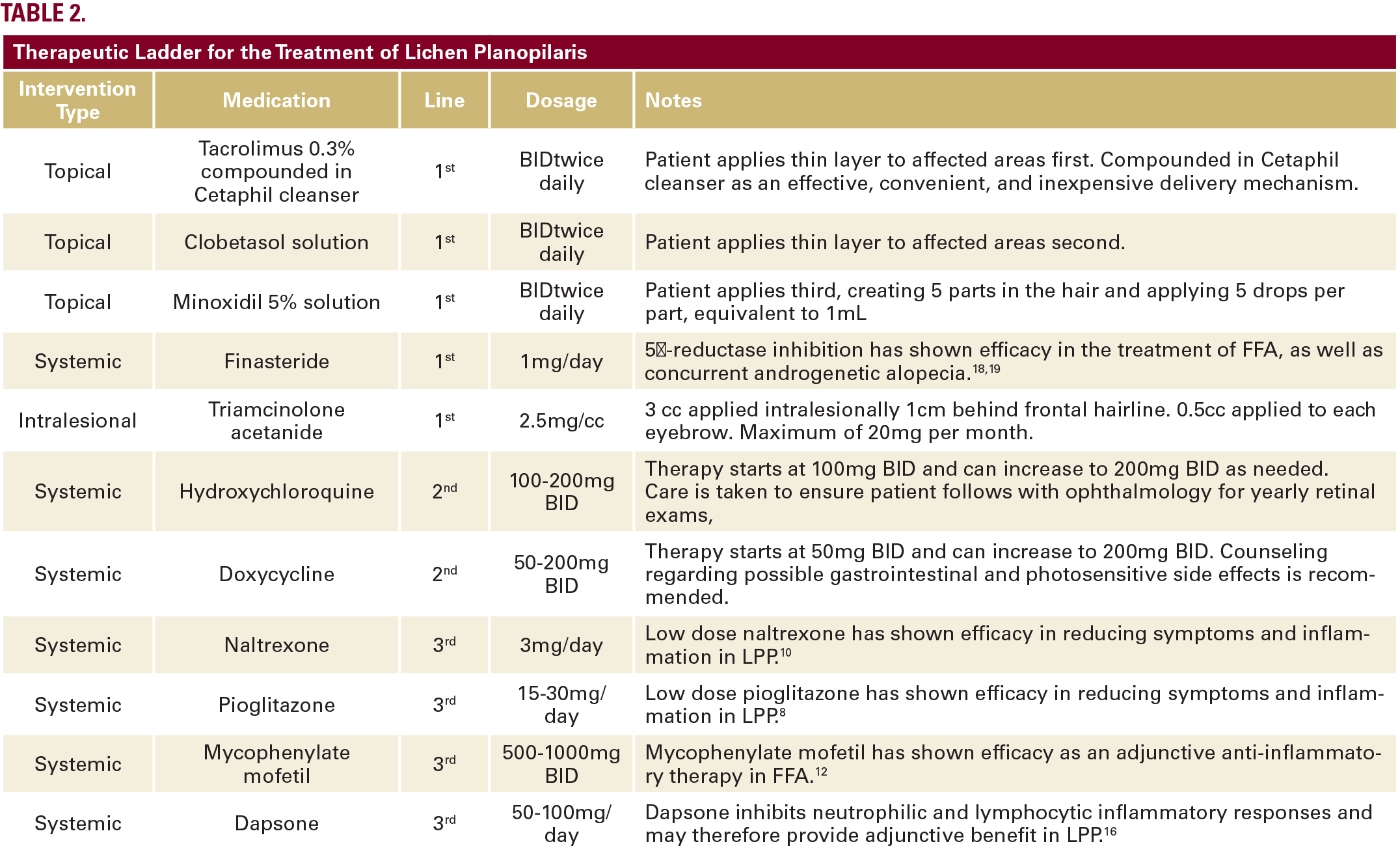 The proposed mechanism and efficacy of pioglitazone hydrochloride in the treatment of LPP is debated.5,6 Diminished tissue expression the peroxisome proliferator-activated receptor gamma (PPAR- γ) has been shown to result in toxic accumulation of lipids and fibrotic destruction of the pilosebaceous unit.6 Studies of PPAR- γ-deficient mice demonstrated progressive hair loss, cutaneous hyperkeratosis, erythema, and complete loss of follicular ostia, as well as scratching behavior, all reminiscent of the clinical presentation and symptomotology of LPP.5,6 On histology, these mice had interstitial lymphocytic infiltrates, dystrophic hair follicles, and destruction of sebaceous glands with follicular fibrosis, while microarray analysis revealed significant increase in gene expression of chemokines and apoptosis-related genes, resulting in increased activation of macrophages and T-lymphocytes. Such findings underscore the importance of PPAR- γ in the clinical and histologic presentation of LPP, confirming that decreased PPAR- γ expression results in activation of pro-inflammatory pathways that lead to aberrant lipid metabolism and ultimately contribute to a cicatricial alopecia. Thus, as a PPAR- γ agonist, pioglitazone hydrochloride may be an effective means of combating the underlying pathogenesis of LPP. 8,9

This single-center retrospective analysis of 23 patients supports the utility of pioglitazone for treatment of LPP. As shown in Table 1, 78% of patients achieved stabilization or significant improvement with the addition of pioglitazone. While these patients were also receiving intralesional glucocorticoids and systemic and topical immunosuppression, their disease was recalcitrant prior to initiation of pioglitazone, suggesting that PPAR- γ agonism can be a beneficial tool in the therapeutic armamentarium for LPP via other pathways implicated in disease pathogenesis. Two studies, of 24 and 22 patients with LPP, found pioglitazone to be effective in controlling symptoms, disease progression, and inflammation in a majority of patients.8,9 However, these conclusions differ from another study of 22 patients in which only a minority of patients benefited from pioglitazone in recalcitrant LPP.5 Variable response rates to pioglitazone have been well described in literature for the treatment of diabetes mellitus, with response rates ranging from 57.1%-71.4% for responders and 28.6%-42.9% for non-responders.11,12 A majority of studies found an average non-responder rate of 20-30%,14 corresponding to our findings of 22% of patients who did not achieve stabilization with pioglitazone therapy. While some have postulated that the insulin resistance index may be a useful predictor of response rates to pioglitazone, no significant differences were found between responder and non-responder groups in terms of age, sex, body mass index, fasting plasma glucose, or the homeostatsis model assessment for evaluating insulin resistance.11,13 Further