Abstract
Bullous pemphigoid (BP) is a rare blistering skin disease that is commonly treated with corticosteroids and immunosuppressive agents. Here, we present a 74-year-old woman with severe BP following a leg fracture who was successfully treated with omalizumab. We started her on a regimen of omalizumab 300 mg subcutaneously every 4 weeks, and within a week she reported significantly decreased pain and faster healing time of lesions. Incidentally, bilateral erythematous, non-blistering dermatitis developed 5 centimeters distal to the injection sites within a week of her first injection and resolved spontaneously in 2 days. She continues to tolerate the omalizumab injections well after 28 months of treatment and has not developed the injection site dermatitis since the first administration. Omalizumab appears to be a promising treatment modality for BP even when associated with transient injection site reactions, but further studies investigating the mechanisms by which omalizumab reduces bullae in BP are needed.

A74-year-old female presented with bullous pemphigoid (BP) that developed after a leg fracture. Following a closed supracondylar fracture of the right femur and subsequent casting and immobilization for three months, the patient developed bullae and toenail deformity on both of her thighs, legs, and dorsal aspects of her feet. Skin biopsy revealed sub-epidermal blistering with numerous eosinophils and histological examination of perilesional tissue by means of DIF revealed 2+ IgG and C3 linear deposits along the dermal-epidermal junction. Diagnosis of BP was further supported by serology showing elevated BP230 IgG of 80 U/mL (Ref <9) and eosinophilia (Eos 47.3%, ref 1% to 6%).

Initial therapy consisted of clobetasol twice daily, doxycycline 100 mg twice daily, and niacinamide 500 mg twice daily. Comorbidity of diabetes mellitus, osteoporosis, leg fracture, and hypertension made the patient a poor candidate for corticosteroids. By the time she presented to our immunology clinic, she described severe and painful blistering and scarring of her feet that interfered with her quality of life and restricted her daily activities (figure 1). She reported 10/10 pain and a score of 15 on the Dermatology Life Quality Index (DLQI).1

Omalizumab treatment was initiated with 300 mg every 4 weeks, administered subcutaneously as two 150 mg doses in the posterolateral aspect of each upper arm. Within a week of the first injection, she reported significantly decreased pain and affected nail and skin tissue began to heal within 48 hours o drug administration. Incidentally, bilateral erythematous, non-blistering and non-pruritic dermatitis developed 5 centimeters distal to the injection sites within a week of her first injection and resolved spontaneously within 2 days (figure 2). There was a concern around these lesions as to whether they were a sequela of BP or a drug-related effect. Given the lack of bullae, pruritus, or erosion in the affected areas, it was concluded that the dermatitis was most likely an injection-site reaction. Despite the transient dermatitis, the patient reported tremendous improvement 4 weeks from her first injection.

Omalizumab therapy was continued, and between the second and fourth week of some treatment cycles, she would developf 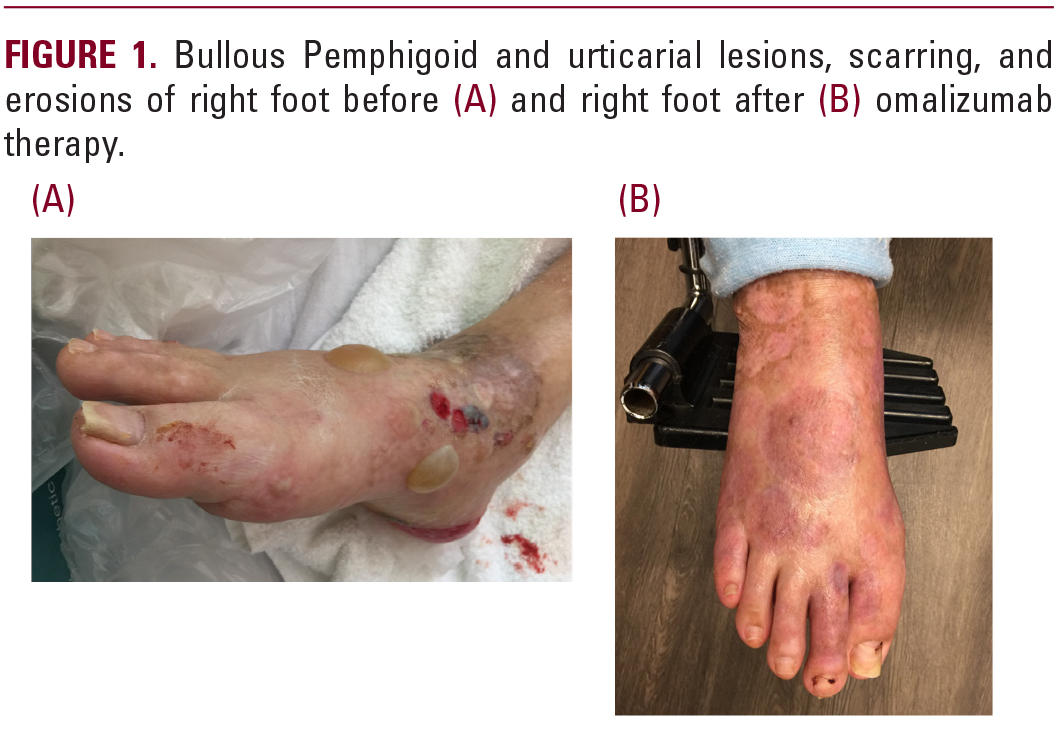