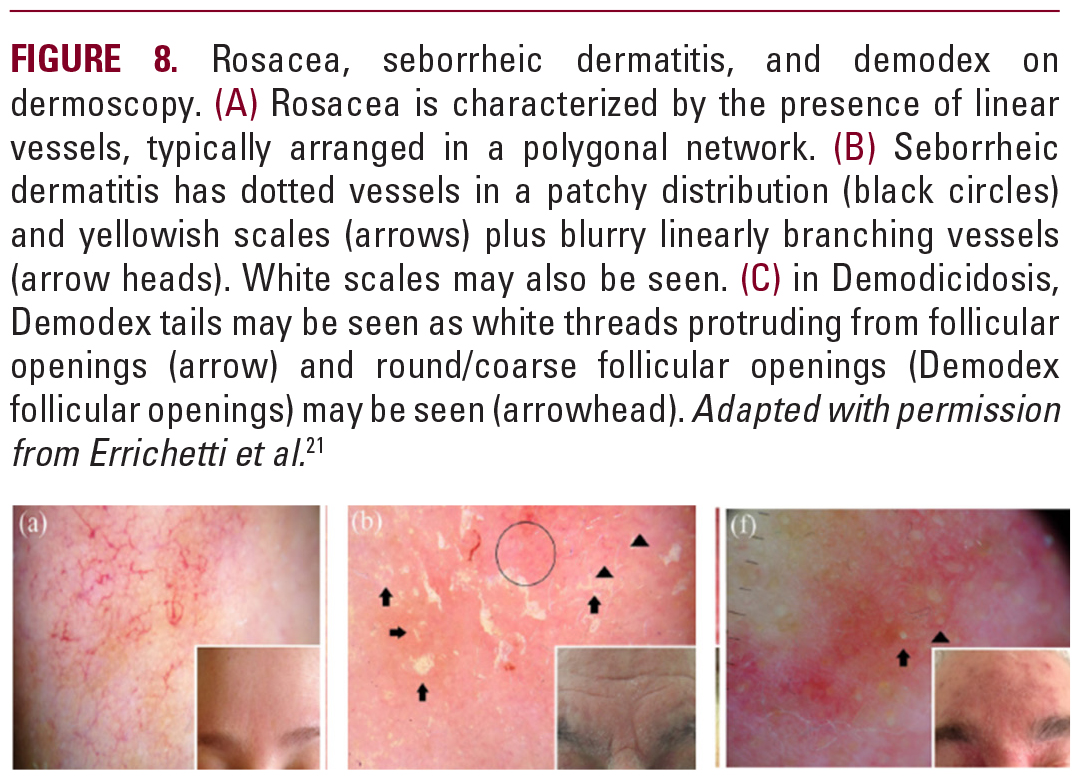 erythema, and papules and pustules (Figure 7); patients may report sensations of skin burning or pruritus. Dermoscopy may show portions of Demodex in and around the follicular opening. 21 Mites may also be seen on microscopy. Demodex mites are part of the normal skin flora but there is evidence of an increased density of Demodex mites in patients with rosacea.22 Patients with demodicidosis show a positive response to antidemodectic drugs.20

Primarily Erythematous Presentation
Lupus erythematosus
Lupus erythematosus is an autoimmune disease with cutaneous manifestations that can resemble rosacea (Figure 10). Pustules are rare in the malar rash of lupus.23 Discoid lupus is named for the coin-like red, scaly lesions that appear on cheeks, nose, ears, and scalp. Lupus can also be associated with red scaly lesions that are similar to seborrheic dermatitis. In patients with skin of color, serologic testing, and skin biopsy may be warranted to correctly diagnose lupus.15 This is especially important if the patient is not responding to typical rosacea regimens.

Photodamage
Photodamage typically includes rough skin, wrinkles/rhytids, as well as facial erythema and telangiectasia (Figure 12). Helfrich et al. argue that there is a subtype of photodamage characterized by significant telangiectasia and persistent facial erythema who lack other rosacea symptoms (flushing, burning, stinging). They note that this usually occurs in older men, and that a distinguishing clinical feature is localization of the telangiectasia and erythema more toward the lateral face rather than central face.25 Photodamage may also manifest as Favre-Racouchot Syndrome, a nodular cutaneous elastosis with cysts and multiple open and closed comedones that are often clustered in the periocular region.26