history of watery diarrhea with mild hematochezia. He also reported an unintentional 24-pound weight loss over the 5 months following the initiation of etanercept. His vitals were normal and past medical, surgical, and social history were unremarkable. The patient had no family history of any autoimmune conditions to his knowledge.

Physical examination was pertinent for diffuse abdominal tenderness to palpation, erythematous annular scaly plaques present on both his elbows and knees, and mild joint deformities. The CBC with differential and iron panel were both unremarkable. Pertinent labs include a normal liver panel and an elevated C-reactive protein of 25 (0-10 mg/dL). Stool PCR and culture were both negative. Colonoscopy with terminal ileum intubation showed active colitis with nodular and focally ulcerative mucosa with pseudomembranes present predominately in the left, right, and sigmoidal colon segments (Figure 1). Pathology results showed moderate active colitis with marked ulcerations and non-caseating granulomas indicative of CD (Figure 2). Of note, IgA and IgG antibody testing for saccharomyces cerevisiae, a useful adjunct test for differentiating CD from ulcerative colitis, was highly suggestive of CD in this patient.

Etanercept was subsequently discontinued and the patient was started on ustekinumab with an IV induction dose of 520 mg administered over one hour. He was prescribed 90 mg subcutaneous maintenance dosing every 8 weeks. The patient experienced remission of both his PA and his new onset CD four weeks following ustekinumab therapy.

The paradoxical induction of psoriasis has been well established in patients who were treated for inflammatory bowel disease (IBD) with TNF inhibitors.6 Recent studies have proposed that the development of CD should be suspected in patients with psoriatic arthritis receiving etanercept who develop gastrointestinal symptoms.7 Although the mechanism underlying this event remains unknown, it is postulated that, in predisposed patients, treatment with etanercept may alter the inflammatory cytokine environment, promoting the development of CD. As a result, etanercept may not only induce, but may accelerate the development of CD in predisposed individuals.8 Thus, it is possible that etanercept induced new-onset CD in our already at-risk patient. This phenomenon has recently been reported in psoriasis treated with adalimumab, inciting the development of ulcerative colitis.9 This report by Kolios et al supports the theory of biologics-induced inflammatory bowel disease (IBD) because their patient’s “paradoxical ulcerative colitis”was improved not by switching to an IBD-effective treatment, but by merely ceasing treatment with adalimumab.9

Given the increasing co-occurrence of psoriatic arthritis and CD, the unmasking of underlying disease is another possible theory in our patient. Etanercept is known to be an ineffective treatment for inflammatory bowel disease as it is not intestinally active. With this in mind, it is possible that our patient’s underlying CD was unmasked by switching him from an intestinally active TNF-α inhibitor, infliximab, to an intestinally inactive TNF-α inhibitor, etanercept. This theory may be supported by Ruemmele et al' s case of CD which developed during the treatment of juvenile idiopathic arthritis with etanercept.10 The child in this case was experiencing mild gastrointestinal symptoms that dramatically increased after initiation of etanercept, suggesting that etanercept either allowed or enhanced the development of CD.

This report is particularly salient for dermatologists as most reported cases of TNF-inhibitor induced pathologies have resulted from the treatment of non-cutaneous conditions and therefore may have escaped the attention of dermatologists. Our case encourages physicians to consider the risk of adverse gastrointestinal effects when prescribing etanercept for psoriatic arthritis.9 Future research should focus on identifying the underlying mechanism for the paradoxical development of CD in patients treated with etanercept and explore whether etanercept induces or merely permits the development of CD. Because the concurrent existence of psoriatic arthritis and IBD is becoming increasingly appreciated in recent literature, healthcare providers should have a high index of suspicion in patients with psoriasis and psoriatic arthritis presenting with unusual intestinal symptoms. Lastly, ustekinumab was successful in relieving 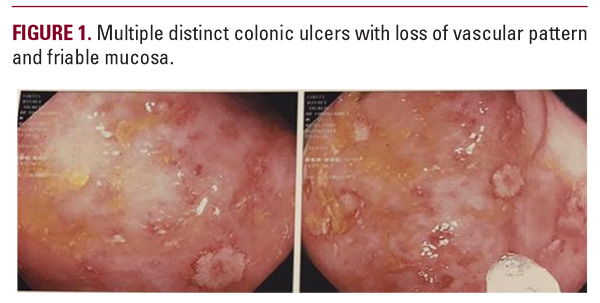 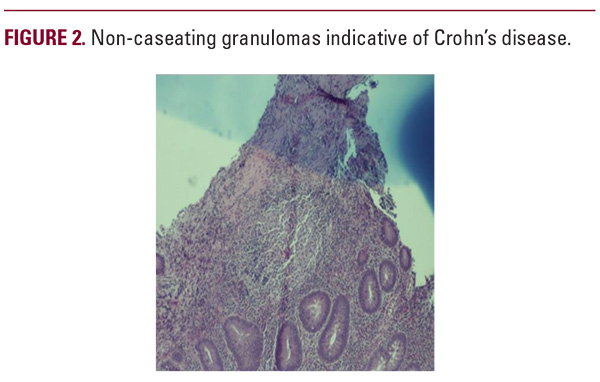