In Vitro and In Vivo Efficacy and Tolerability of a Non-Hydroquinone, Multi-Action Skin Tone Correcting Cream

Cutaneous hyperpigmentation is among the most common complaints in dermatology offices and is one of the more difficult conditions to treat, as many regimens are often complicated and may include the use of up to 6 topical agents in addition to other treatment modalities. Furthermore, products may be highly irritating. 18 Historically, hyperpigmentation has been managed with topical formulations that include 4% hydroquinone; while often effective,19 concerns regarding irritation and long-term use have led to the development of non-HQ-containing formulations.

In an effort to inhibit melanin production at the multiple pathways involved in skin pigmentation, currently available prescription and nonprescription products often include the use of several topical agents including the adjunctive use of retinoids, AHAs, moisturizers and/or hydrating serums to enhance overall efficacy and minimize adverse effects.3,14,18,19,20-28 This systembased approach requires consumers purchase and use multiple products in order to achieve optimal results. This not only necessitates adherence to complicated regimens, but these regimens can also be quite costly.

ETCS was developed to address the need for an efficacious, streamlined approach to the treatment of hyperpigmentation and other concerns associated with photodamage skin, such as redness and age-related yellowing of the skin, skin tone, and fine lines and wrinkles. The synergistic blend of ingredients contained in ETCS were identified to comprehensively inhibit melanin by addressing the primary pathways of melanin production and improve the overall quality of skin (Table 2). For example, in addition to inhibiting ROS and melanin production at several levels, Diglucosyl Gallic Acid brightens skin tone and reduces the appearance of redness. Derived from the Australian Kakadu plum, Terminalia Ferdinandiana is a potent form of vitamin C that reduces oxidative stress in the skin, brightens skin, and also enhances collagen and hyaluronic acid, thus contributing to improvements in tone, evenness, redness, and wrinkles. ETCS effected early, significant reductions from baseline in the appearance of dyschromia based on expert and biometric assessments. Hyperpigmentation is often accompanied by other concerns associated with cumulative sun and environmental exposures, including changes to skin texture, color, and the development of fine lines and wrinkles. In addition to brightening and evening skin tone, visible improvements in skin texture, erythema, fine lines/wrinkles, and pore size were observed leading to enhanced global appearance in the quality of skin as a result of the multi-functional properties of its ingredients. Importantly, efficacy outcomes mirrored subject satisfaction, with subjects reporting high levels of satisfaction in improvements in overall appearance, evenness, brightness, tone, lightening of dark patches, and discoloration of skin. Progressive improvements were observed with continued use through week 16 in all categories measured.
Despite the small sample size, the addition of AHA-Ret each night resulted in statistically significant improvements in dyschromia and melanin index, along with substantial improvements in the appearance of erythema, fine lines/wrinkles, and skin texture. The advantage of combination treatment increased over time, without adverse effects. AHA-Ret is a double-conjugated retinoid/AHA-based cream that combines a potent retinoid and lactic acid into one molecule via double conjugation. Double bonds joining the two molecules are naturally broken in the skin through hydrolysis, gradually releasing the retinoid and lactic acid into the skin, maximizing efficacy and minimizing potential irritation.

AHA-Ret also contains glycolic acid to support exfoliation of skin which is vital in the removal of melanin from the epidermis, as well as ingredients that help soothe, hydrate, protect and rejuvenate skin.17

A new, non-hydroquinone skin tone correcting cream demonstrated early, clinically significant reductions in dyschromia and melanin index in subjects with photodamaged skin. Combination use with a retinoid-based AHA cream led to enhanced visible reductions in hyperpigmentation and improvements in 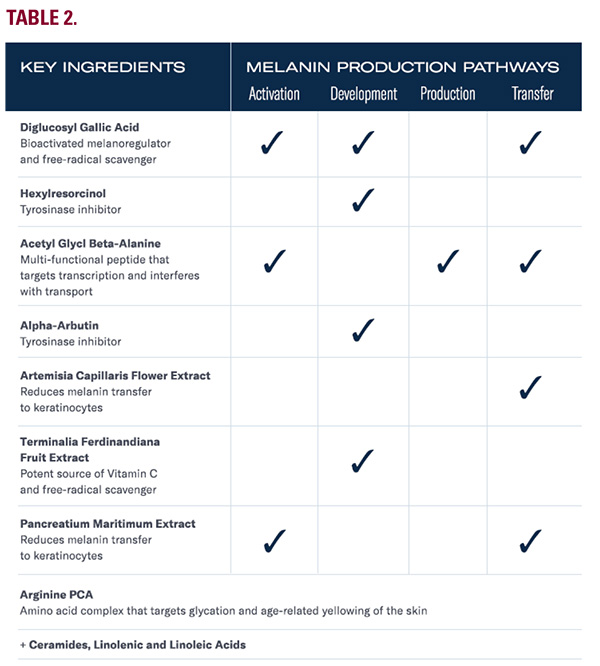