pre-treatment baseline, week 2, week 4, week 8, and week 12 time points using the VISIA-CR (Canfield Scientific, Fairfield, NJ) imaging system. Full frontal, left, and right profile views of the face were obtained, under standard visible, crossed-polarized, and parallel-polarized lights.The melanin index (MI) and erythema index (EI) scores of lesional melasma and PIH skin were measured in triplicate usinga colorimeter (Mexameter MX 18, Courage + Khazaka GmbH, Koln, Germany). Measurements of the lesional areas, as well as the adjacent perilesional normal skin (control site), were captured. The difference between the control and the lesionalareas was calculated.Subject Self-Assessment via QuestionnairesSubjects responded to questions regarding the formula’s aesthetics and perceived efficacy throughout the course of the study.Statistical AnalysisAll subjects who completed the clinical study were included in the statistical analysis. Data were tested for normal distribution with the Shapiro-Wilk test, using a cutoff value of P

Monolayer Cultures of Human Epidermal Melanocytes Inhibition by TXA on PGE2-induced melanogenesis was evaluated in cultured human epidermal melanocytes. Normal human epidermal melanocytes from four different donors obtained from ZenBio (Research Triangle Park, NC, USA) were plated at a density of 10,000 cells per cm2 and grown in serumfree melanocyte growth medium. After 3 days, when the cells reached 70% confluence, medium was changed, and cells were treated over 72 hrs with 30 nM PGE2, and 50 or 100 μM TXA or combination of PGE2 (30 nM) + TXA (50 or 100 μM). Control cells were treated with equivalent amount of vehicle (ethanol for PGE2, water for TXA) without any active. After 4 days of cell growth, the cells were harvested, and the melanin content was analyzed using OD measurement at 405 nm. The cells were stained with Fontana Mason stain for melanin quantification.

Assessment of Facial DyschromiaAll clinically-graded skin attribute parameters showed a statistically- significant decrease (improvement) in scores at all time points compared to baseline (Table 1). Improvements were apparent as early as 2 weeks and were maintained through the study conclusion (week 12). Significant improvements were observed in the appearance of PIH, hyperpigmentation, skin texture, and skin tone homogeneity. A significant reduction in melasma, as evaluated by the mMASI scale, was also observed as early as 2 weeks, and at all time points thereafter. 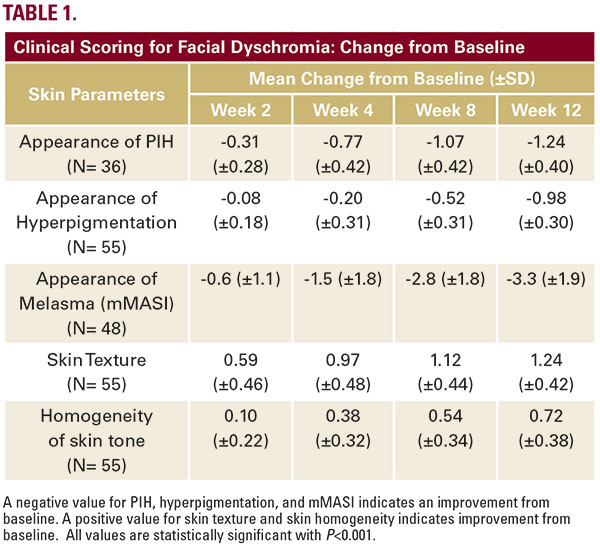