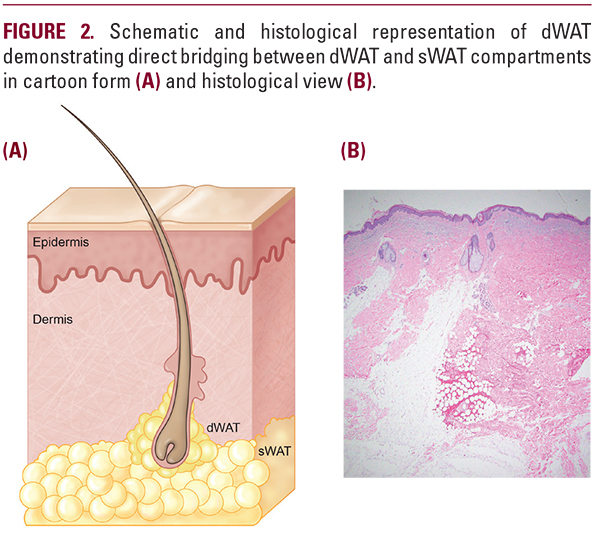 these two compartments, thus connecting regions which can be directly affected by UV radiation with much deeper layersof fat and paracrine signaling between these compartments has been demonstrated.16 This provides a mechanism for directcommunication to sWAT by topical application targeting dWAT directly or facilitating even more focused transmission by hair follicle mode of entry. Furthermore dWAT can modulate its structure and turnover of adipocytes at far higher rates than sWAT – this makes dWAT a first responder to UV radiation and topical applications.16 To expand on this concept, it is now theorized that soluble factors (IL-6, IL-8, MCP-3 etc.) produced in the upper dermis during UV exposure diffuse into sWAT via dWAT and trigger modification of sWAT metabolism and differentiation.16 This discovery is extremely important, not only in explaining the ability of topical preparations to affect sWAT but also in creating a new protection target for anti-aging indications.Another interesting aspect of the dWAT compartment is its unique relationship with the hair follicle and the dynamic reciprocitythat is enjoyed between these two anatomic regions through Wnt beta catenin signaling pathway.17 Research ofthis signaling has revealed that dWAT is directly stimulated in unison with anagen and regresses through telogen.17 Thisis a logical relationship when one considers the evolutionary function both regions serve in relation to thermoregulation. Apractical corollary to this research is a note to be cautious when injecting substances such as deoxycholate for fat dissolution –if injected too superficially with direct effect on dWAT, telogen may be induced and alopecia may result, thus injecting in the correct region is paramount to avoid this possibility. It will be interesting to monitor the occurrence of alopecic episodes with this technology following definition of this novel anatomic region.

Adipose Tissue Signaling from the Top

Having defined the anatomy, it is apparent that various mechanisms exist for topical preparations to communicate with subcutaneous fat. These may involve complex signaling mechanisms or direct communication in some cases. In effect, three possible channels exist for topical application to achieve subcutaneous signal transmission:1. Keratinocyte signaling. This is the most indirect route which relies on complex signaling occurring from the skin surface to tissues below, as far down as sWAT compartments. This signaling mechanism was identified principally when investigating the hair follicle fat tissue relationship. It was found that the activation of epidermal Wnt/β-catenin signaling promoted adipocyte differentiation and hair growth. This signaling pathway is initiated by epidermal keratinocytes synchronizing patterns of hair follicle growth and expansion of the dermal adipocyte layer.17 Recent studies have demonstrated that activation of epidermal Wnt/β-catenin mediates effects by secreted factors, including insulin-like growth factor 2 and bone morphogenetic proteins 2 and 6.17,18 The relationship was discovered related to evolutionary thermoregulatory mechanisms where increased anagen hair follicle activation was accompanied by adipogenic differentiation and increased adipose tissue, that is hair growth and adipose tissue thickness worked together to achieve heat insulation. Given that the epidermis and dermis are separated by a basement membrane, this change in adipose tissue was demonstrated to occur by release of secreted factors noted above.172. Interfollicular absorption through intact stratum corneum. This is limited to molecules with molecular weights lessthan 1000D, preferably closer to 500D. Small peptide molecules (500-800D) are better suited to this mode of absorption.In addition, lipid moieties (palmitoyl, myristoyl) or liposomal carriers may be added to further enhance absorption of these small molecules. Fortunately, as demonstrated above, the absorption may not need to be down to subcutaneous depths but dWAT may facilitate communication with sWAT from higher levels within the dermis. Growth factors may vary from 15000D to 150000D in MW so almost no absorption is possible through this route.3. Hair follicle dWAT transmission. As elucidated above, this fat compartment provides an exciting new area for explorationfrom anti-aging perspectives and from topical application routes providing the bridge between hair follicle surrounded dWAT to underlying sWAT. As opposed to rodents where a distinct panniculus carnosus layer separates dWAT from sWAT, in humans the two merge together providing direct access to the sWAT via the hair follicle channel.14 Below the skin surface, the hair follicles provide