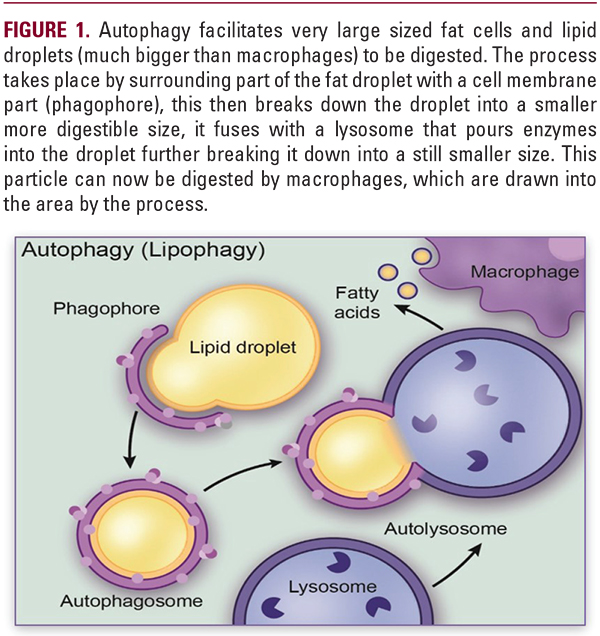 It would appear that the lipolytic effect of these technologies all precipitate a change or disruption in the cell structure, whichrelease mediators, particularly TNFα, inducing lipolysis through intracellular signaling cascades, metabolites, and lipid dropletassociated proteins.8In general, irrespective of the cause, the lipolytic process induces an innate immune response with activation of resident macrophages within the adipose tissue. The cellular changes occurring in all adipocytolytic processes described above involve damage to the cell membrane in one form or another, releasing saturated fatty acids from the lipid contents, which triggers local inflammation in contrast to the classic description of cellular silent apoptosis.4 The released saturated fatty acids induce macrophage activation with release of cytokines such as tumor necrosis factor alpha (TNF-α) and other inflammatorymediators from the macrophages and the adipocytes themselves.4 This inflammatory process and TNF-α induction can improve the efficacy of the procedures by stimulating the lipolytic process,8 however the great challenge to these macrophages is the ultimate digestion of these large particles that may delay the process of dissolution seen over many months following these procedures.

Macrophages play important roles in the clearance of dead and dying cells, and in particular, of apoptotic cells. In fact, persistenceof apoptotic cells following defective clearance has been found to be associated with the development of certain autoimmune diseases.9 Lipid droplets are extremely large in size and challenging for smaller macrophages to phagocytose, often necessitating a clustering of macrophages surrounding one droplet (crown-like effect) secreting lysozymes in an effort to engulf these large bodies.Fortunately, the process of autophagy is a great help in dealing with large intracellular components. Simply put, autophagy is the cells' way of repackaging very large organelles and intracellular bodies (such as lipid droplets) so that macrophages can cope with their digestion.10 The process involves sequestering a portion of the cytoplasmic organelle or droplet, surrounding it with a portion of cell membrane and delivering it to a lysozyme for digestion (Figure 1). This creates smaller components that can then be digested by macrophages. In recent years, studies have demonstrated that lipid droplets are taken up by autophagy to cope with lipid mobilization and droplet digestion – this process, termed lipophagy, specifically targets lipid droplets and adipose cellular debris for digestion.10,11Autophagic activity decreases with age in most tissues resulting in waste product accumulation with aging – the decrease in lipophagy, in particular, and the resultant increase in intracellular lipid droplets, may contribute to atherosclerosis, hypercholesterolemia, and other elements of metabolic syndrome of aging.12

White adipose tissue (WAT) is no longer considered a simple energy depot and is now recognized as an organ with major endocrine and metabolic effects. Traditionally, WAT was considered as two distinct anatomical depots, namely subcutaneous (sWAT) and visceral white adipose tissue (vWAT), with differences in cellular and metabolic effects.13 More recently, a new type of WAT, dermal WAT (dWAT), has been identified and is recognized as playing a major role in skin processes such as hair follicle growth, thermoregulation, wound healing, and signal transmission.13 This layer lies in the reticular dermis encasing mature hair follicles14 (Figure 2a and b). In addition, this fat compartment is associated with specific adipose stem cell phenotypes (CD24+), distinctly different to sWAT, suggesting unique functions of this fat depot.13 dWAT is organized in conelike structures (often identified in deeper skin graft donor areas) and is particularly associated with scarring when exposed at that depth.15,16Alterations of dWAT content have been identified in aged skin with chronic photo damage (particularly UVA) causing replacement of adipocytes by fibrotic structures, likely an adipocyte- myofibroblast transition.16 These dermal adipocytes are extremely important due to their plasticity and their ability to change their phenotype in a very short time. In addition, they communicate with sWAT forming spatial ‘fat bridges’ between