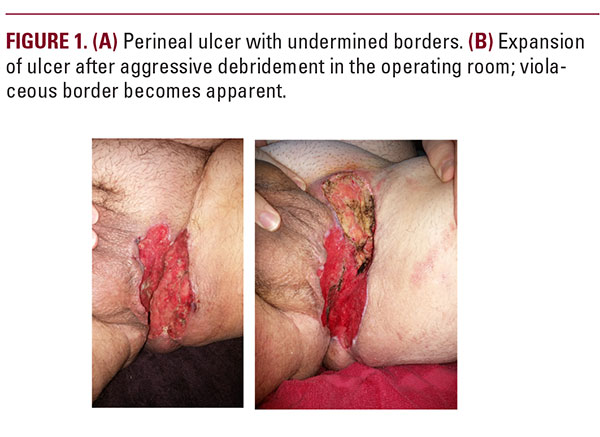 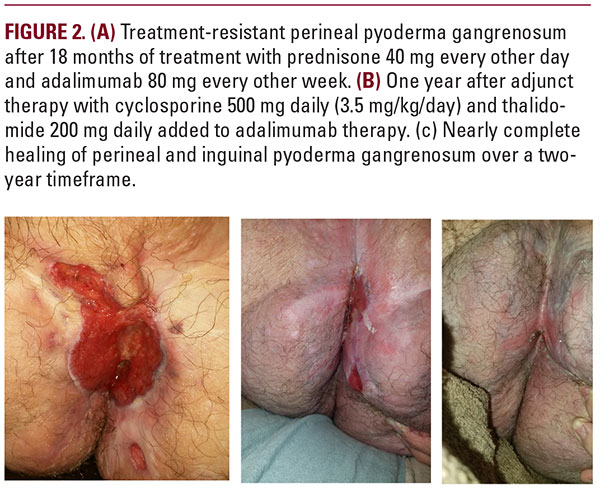 are limited to anecdotal data in case reports, the first of which dates back to 2005.3 We herein describe our experience of clinical success using triple combination therapy of cyclosporine, thalidomide, and adalimumab for recalcitrant Crohn’s-related perineal and inguinal pyoderma gangrenosum.

30-year-old male with Crohn’s disease (CD) developed an ulcer in the perineum and inguinal crease nearly five years after a total colectomy with ileostomy and rectal closure. The ulcer was initially treated with multiple surgical debridements, which led to ulcer expansion (Figure 1). An outside dermatologist was consulted and performed a biopsy that demonstrated perifollicular neutrophilic microabscesses with neutrophilic infiltrates undermining the epidermis. There was no granulomatous inflammation to suggest cutaneous Crohn’s disease. Special stains including Gram, PAS, and Fite stains failed to reveal an infectious etiology. The patient was diagnosed with PG based on the history of pathergy with debridement, classic histological findings and exclusion of other causes of ulceration, all in the setting of Crohn’s disease. He was appropriately started on oral prednisone with intralesional corticosteroids and adalimumab which, led to moderate improvement. He was referred to our clinic after 18 months of treatment with prednisone 40 mg every other day and adalimumab 80 mg every other week (Figure 2a) after this regimen was no longer achieving progress.For the remaining treatment-resistant ulcer, we initiated adjunct therapy with cyclosporine 500 mg daily (3.5 mg/kg/day) and thalidomide 200 mg daily. Neoadjuvant thalidomide was selected as treatment for this gentleman since the drug specifically inhibits TNF-α release and activity,4 along with a myriad of other anti-inflammatory effects including suppression of IL-12 production5 and inhibition of IFN-γ.6 With combination cyclosporine, thalidomide, and adalimumab, the prednisone was tapered and discontinued. The patient noticed his ulcer contracting in size within eight weeks. After several months of consistent improvement, the patient was weaned off of cyclosporine and thalidomide. He was followed up periodically and his progress was measured by photo documentation. Over the next two years, the patient’s disease waxed and waned, and each flare was controlled adequately by reintroducing varying doses of cyclosporine and thalidomide while remaining on adalimumab continuously.

Treatment of PG is often challenging for multiple reasons. Many treatments have been attempted with limited success. The ongoing hunt for therapies suggests no one treatment has been particularly efficacious. Nearly all current therapeutic options are empiric and anecdotally based, lacking data to provide sound recommendations. Most therapeutic regimens have been described in case reports and small series. While no standardized treatment regimens have been proposed, two well-designed randomized controlled trials are documented for the treatment of PG. In 2005, Brooklyn et al conducted a blinded, placebo-controlled study describing the successful use of infliximab infusion at 5 mg/kg.7 In 2015, results from Craig et al8 in a head-to-head trial comparing prednisolone 0.75 mg/kg/day and cyclosporine 4 mg/kg/day demonstrated equal efficacy between both regimens.9 Both randomized controlled trials were designed and implemented in the United Kingdom, which further highlights the need for trials in the United States, as demographics and environmental exposures differ between the two nations.Therapeutic goals when treating PG include reducing local inflammation within the chronic ulcer to reduce pain and promote healing, while correcting any corresponding underlying systemic illness. Attempted treatments have included corticosteroids, either locally or in combination with systemic corticosteroids, paired with adjunctive corticosteroid sparing agents.10 For mild or early lesions, local therapy is typically initially attempted.