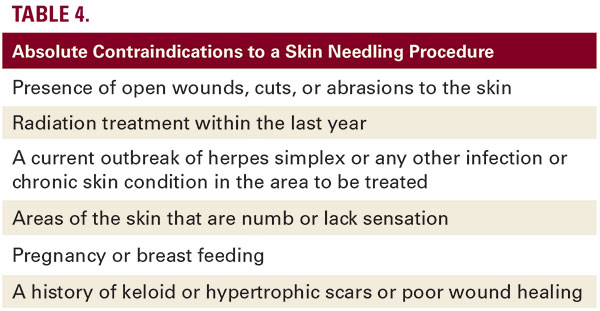 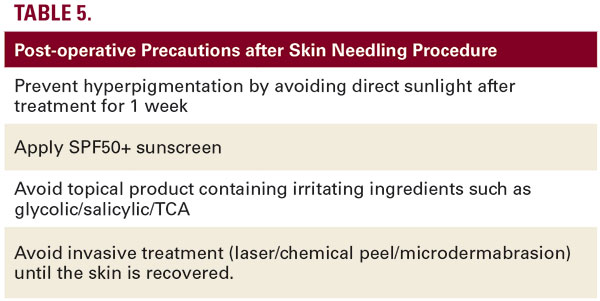 deposition at 6 months’ post-operation. The epidermis demonstrated a 40% thickening of stratum spinosum and normal rate ridges at 1-year post-operation.19 Results generally start to be seen after about 6 weeks, but complete improvement can take at least 3 months to occur, and, as the deposition of new collagen takes place slowly, the skin texture will continue to improve over a 12-month period.18 Most individuals will require around three treatments approximately 4 weeks apart. Some clinical conditions can be considered as absolute contraindications for a skin-needling procedure (Table 4). Several early reports suggested that performance of dermatosurgical procedures in patients on oral isotretinoin is associated with abnormal skin healing, keloid, or hypertrophic scar formation. However, a task force of experts from the American Society for Dermatologic Surgery concluded that there is insufficient evidence to justify delaying treatment with superficial and focal dermoabrasion and nonablative lasers for patients recently exposed to isotretinoin.20 Complications are very rare, and when they occur, are represented by post-inflammatory hyperpigmentation, erythema, acne, and herpes flares superinfection. Allergic contact dermatitis from materials used in the needles has also been observed. Complications risk can be reduced following some simple post-operative precautions (Table 5). The management of these complications are different for different patients. In case hyperpigmentation occurs, it should be treated with a solution of glycolic acid (50%) or hydroquinone creams combined with sunscreen or laser therapy. In the case of infection, an antibiotic therapy has to be prescribed: either topical therapy with mupirocin 2% ointment, three-times daily for 10 days, alternatively, fusidic acid, and, in severe cases, systemic therapy with amoxicillin and clavulanic acid, twice daily for 6 days. If aggravation of acne occurs, it is possible to consider local or systemic antibiotic therapy, depending on the gravity of the condition. The observation of all the pre- and post-operative precautions and respect of contraindications may reduce the risk of adverse effects, which are minimal with this type of treatment and typically include minor flaking or dryness of the skin, milia, and hyperpigmentation, which can occur only very rarely and usually resolves after a month. Edema and erythema are the most frequent sequelae. Recovery may take 24 hours or up to a few days. Most patients are able to return to work the following day.Skin needling provides good outcomes with negligible risks and can be safely performed on all skin colors and types. There is a lower risk of postinflammatory hyperpigmentation than other procedures such as dermabrasion, chemical peels, and laser resurfacing. A peculiar type of microneedling is fractional radiofrequency microneedling (FMR) in which insulated needles release radiofrequency waves to act deeper in the dermis, thus preventing epidermal damages. After damage to the reticular dermis, long-term dermal remodelling, neoelastogenesis, and neocollagenogenesis results in dermal thickening. The treatment is generally well tolerated with transient side effects such as mild erythema, post-inflammatory hyperpigmentation, and track marks of the device.21 Lasers The efficacy of lasers and radiofrequency in atrophic acne scarring is confirmed by many comparative and observational studies. Different types of laser, including the nonablative and ablative lasers, are very useful in treating acne scars. Ablative lasers achieve removal of the damaged scar tissue through melting, evaporation, or vaporization. Carbon dioxide laser and Erbium YAG laser are the most commonly used ablative lasers for the treatment of acne scars. Nonablative lasers do not remove the tissue but stimulate new collagen formation and cause tightening of the skin resulting in the scar being raised to the surface. Among the nonablative lasers, the most commonly used are the Nd:YAG and diode lasers.22 In Table 6, we summarize some characteristics of the most used ablative and nonablative lasers. Ideal candidates for laser treatment must present a skin disease with acne of at least 1 year; they should have stopped taking oral isotretinoin for at least 1 year; they should not have presented skin infections by herpes virus during the six months prior to treatment; they must not have a history of keloids or hypertrophic scarring. All ablative lasers showed high risk of complications and side effects. Nonablative skin remodeling systems have become increasingly popular for the treatment of acne scars because they decrease