Topical Vehicle Formulations in the Treatment of Acne

The BPO 4% and 8% creamy wash in a hydrophase base involves application to the face for a few seconds to minutes, followed by rinsing with water.19 Despite its short contact time, clinically visible improvement can be expected by the third week of therapy, with maximum reduction by approximately 8 to 12 weeks.11 In a clinical trial, benzoyl peroxide creamy washes were shown to have superior antibacterial activity compared to several other benzoyl peroxide products.20 Moreover, a comparative study found greater physician preference for BPO 4% in hydrophase base as compared to BPO 3% cleansing lotion.11As a gel vehicle, benzoyl peroxide 4% and 8% in a hydrophase base contain benzoyl peroxide as the active ingredient, in addition to purified water, cetyl alcohol, dimethyl isosorbide, fragrance, simethicone, stearyl alcohol, and ceteareth-20.19 The solvent dimethyl isosorbide is of importance in this formulation because it helps to dissolve crystal residues of BPO left behind after water and other volatile solvents dissolve. This is thought to help reduce the irritation associated with BPO and improve its bioavailability.11Sawleshwarker et al.21 reported the results of a multicenter, open-labeled, non-comparative study to evaluate the efficacy and irritation potential of benzoyl peroxide 4% cream in a hydrophase base in acne vulgaris. At the end of the six-week trial period, 85.6% of patients had a good to very good effect with treatment. In fact, by the end of the second week of treatment, 36.9% showed good to very good improvement, and 43.6% of patients showed a fair response. The profile of side effects observed revealed that 53.8% of total patients did not have any irritation, 34.6% had minimal irritation, and only 11.6% had moderate to severe irritation. Patients’ assessments were in accordance with these results; 72% of patients reported a satisfactory improvement at the end of 6 weeks, 23.6% reported a very satisfactory improvement, and only 4.4% reported an unsatisfactory response. Assessment of irritation after treatment showed that 53.8% of patients did not report any irritation, 41.4% had some irritation, and only 4.8% of patients reported troublesome irritation.21DapsoneSystemic dapsone has been used for inflammatory conditions for many years, but the use of topical dapsone for acne vulgaris is relatively new.3 Stabilizing topical dapsone has made creating a topical formulation challenging, but this has recently changed. The dapsone gel vehicle contains diethylene-glycol monoethyl ether (DGME), which facilitates permeation of the active drug into the skin and any undissolved drug, remains in the pilosebaceous unit. Through this method, the active dapsone molecule can accumulate in the skin without increasing systemic absorption.22Fixed Combination FormulationsAntimicrobial FormulationsFixed combination clindamycin/benzoyl peroxide formulations are well established for the management of mild to moderate inflammatory acne vulgaris. The aqueous gel vehicle of clindamycin/benzoyl peroxide 5% contains two different and complementary moisturizers that are intended to counteract any potential irritation associated with benzoyl peroxide: glycerin 4% and dimethicone 1%.23 Glycerin is a humectant, which is a hydroscopic substance that draws water from the epidermis/dermis to the stratum corneum.24 If used without an occlusive though, humectants can increase transepidermal water loss (TEWL). Transepidermal water loss is a sign of barrier dysfunction seen in most inflammatory skin conditions. Occlusives, such as dimethicone, help to form a barrier to reduce TEWL while also conditioning the skin. Compared to non-treatment, the application of combination dimethicone and glycerin was shown to reduce transepidermal water loss.24Retinoid CombinationsThe other group of combination formulations features retinoids. These formulations contain either the first generation retinoids or the second-generation retinoids, such as the naphthoic-acid derivative adapalene. Adapalene is photostable and is not degraded in the presence of BPO.25 The molecule has selective affinity for RAR-γ and RAR-β. It was found to have better tolerability than tretinoin with similar or greater reductions in inflammatory, non-inflammatory, and total lesion counts.25The efficacy, safety, and tolerability of fixed combination adapalene 0.1% and benzoyl peroxide 2.5% have been well established in multiple controlled trials. Use of the combination formulation showed more significant reductions in inflammatory, non-inflammatory, and total lesion counts than either of its constituents alone or vehicle.26-28 The tolerability of the fixed combination gel was similar to that of adapalene alone.26Another fixed combination formulation containing a retinoid is topical tretinoin with clindamycin. This combination provides complementary methods of action in that the retinoid decreases 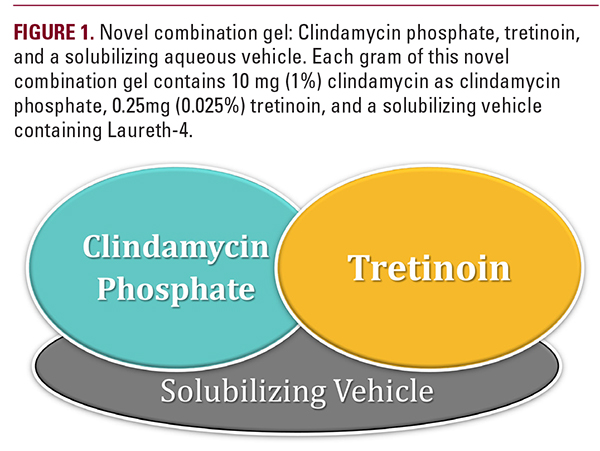