freeze-thaw cycles to achieve destruction while avoiding damage to the underlying dermis and the surrounding skin that may lead to scarring and dyspigmentation.11,12 In one study of Asian patients, electrocautery for SKs caused post-inflammatory hyperpigmentation in 20% of cases.10 Despite the significant limitations of procedural techniques, attempts to use topical agents for the management of SKs have been limited.8,13 In a non-randomized, open-label study of 15 patients, applications of topical calcipotriene 0.005% ointment, imiquimod 5% cream, and tazarotene 0.1% cream were ineffective or impractical. Tazarotene led to clearance in 47% of SKs but required 6 months of therapy and caused significant skin irritation and burning in patients.11 In a double-blind, paired comparison study of 58 volunteers, ammonium lactate 12% lotion (Lac-Hydrin®) was no better than vehicle for the treatment of SK. Thus, a topical treatment that allows for consistent application by any healthcare provider, and with a favorable safety profile, would represent an important therapeutic modality in the management of non-irritated SKs.Past analysis of data from two phase 3 trials with HP40 versus vehicle based the measurement of primary efficacy on proportion of patients with complete clearance of all 4 target SKs versus vehicle at day 106.7 In this paper, we wanted to understand the treatment effect measured as a percentage of SK lesions cleared, and stratified by anatomic location. This is relevant because one-third of patients present with 15 or more SKs,9 and understanding the anticipated treatment effect based on each SK’s anatomic location would allow the clinician to better counsel patients on the likelihood of treatment success. Consistent with the data from phase 2 trials, this analysis showed treatment response was highest for facial SKs (65% of SKs clear/near-clear and 43% of SKs clear).8 In addition, SKs on the face were more likely to be clear or near-clear 21 days after initial treatment (43%) compared with the trunk (31%) or extremities (14%).In previous reports, analysis of safety data for HP40 was presented with a listing of LSRs based on severity at day 106. Here, we sought to understand the LSR data in clinical context of anatomic location and timing of the post-treatment reactions. The most common acute LSRs were erythema, stinging, and edema, which occurred at similar rates regardless of anatomic location of the SKs. These acute LSRs generally resolved or lessened within 1 week of HP40 application, although mild erythema persisted in 6-12% of the SKs at day 106. The proportions of SKs reported to have hyperpigmentation, hypopigmentation, or scarring were low and mostly mild at 106 days after treatment, regardless of anatomic location. Facial SKs, which may be of greater concern to patients, consistently had the lowest reporting of these delayed treatment reactions (Table 3).There are several possible explanations for the higher treatment effect of HP40 on facial SKs. One possible explanation is variations in skin topology (histology and physiology), such as water or lipid composition differences across different anatomic sites. Facial skin has higher trans-epidermal water loss compared with the skin on the trunk and extremities15 and the stratum corneum on the face is significantly thinner compared 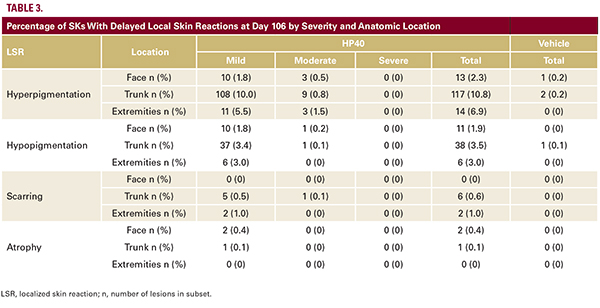