of the offending drug usually results in a rapid return to normal renal function, oral acyclovir (or valacyclovir) may induce acute nephrotoxicity.22 This may be a realistic consideration – both during high dose episodic and chronic suppressive therapy - in those individuals with diabetes, hypertension, or any other reason for decreased creatinine clearance. Famciclovir is apparently not similarly linked to kidney damage.A recent (approved April, 2013) innovation in herpes labialis treatment is a muco-adhesive buccal tablet containing 50 mg of acyclovir. Large multinational pivotal trials included well over 700 patients. A milk derived protein functions as an adhesive that allows the tablet to stick to the ipsilateral upper canine fossa for the requisite 6 hours until dissolution. During the time the intact tablet adheres to the buccal mucosa and gradually dissolves, eating and drinking are permitted. If applied as studied (within one hour of prodrome onset), the drug hastens episode resolution by one day, reduces time to healing by about a half day, and leads to a greater number of aborted attacks (35%) compared to placebo.23 What is rather unique about this drug is that it has been shown to actually reduce the number of future outbreaks and increase the time between subsequent outbreaks; muco-adhesive acyclovir tablets increased the time to next recurrence by 40 days (median) to 105 days (mean).23 “Real world” utilization may lead to even better performance in this regard.24 In short, acyclovir buccal tablet is the first antiviral drug that has demonstrated reduction in the number of fever blister outbreaks following an episodic treatment. Why can a single 50 mg tablet provide such benefit? Despite very low acyclovir plasma concentration, the buccal adhesive tablet provides extremely high concentrations in saliva and both oral and labial tissue.25 In this manner, the overall viral load is likely reduced by addressing all the likely HSV-1 reservoirs, not only in the trigeminal ganglia but also within the peripheral nerves and oral soft tissues. The simple course of therapy (one tablet), a lack of significant plasma concentration, and the ability to alter the natural course of the disease all make this an exciting new modality for those with frequently recurrent herpes.Role of Parenteral Acyclovir Acyclovir Sodium Injection is a sterile, aqueous solution for intravenous infusion, containing 50 mg acyclovir per mL. This formulation is indicated for the following HSV-1 infections: herpetic encephalitis, neonatal herpes infection, and both initial and recurrent mucosal and cutaneous herpes simplex in immunocompromised patients. The standard dose is 5 mg/kg infused over one hour, every eight hours; higher doses may be utilized for encephalitis, in neonates, and for eczema herpeticum. Adequate hydration is essential and dosage adjustments are mandatory in the face of reduced renal function. Because herpes labialis in immunocompromised and immunosuppressed individuals can be devastating (Figure 1), parenteral acyclovir is often used. However, at least one meta-analysis suggested that intravenous acyclovir and oral valacyclovir (1 gram BID) might well be equipotent.26 Acyclovir Resistance HSV-1 acyclovir resistance is rare in clinical isolates obtained from the general population (<1%), but is common among clinical isolates obtained from immunosuppressed and immunocompromised individuals (between 2.5% and 10.9%)27 Acyclovir resistance is due to genetic mutations producing polymorphisms in the thymidine kinase and/or DNA polymerase genes. Luckily, many acyclovir-resistant mutants exhibit a reduction in their capacity to establish latency and to reactivate. Intravenous foscarnet or cidofovir are usually utilized. Details can be found elsewhere.27,28 Thermotherapy Short application of intense heat may be of benefit. A certified medical device which delivers a four second burst of 50-510C heat through a small portal is in wide use in England, Europe, Canada, and Australia. When applied one to two times during the day of prodrome onset, the process may be aborted (no vesicles or erosions). If used on already active lesions, it may shorten the time to resolution by up to eight days. This device is not approved in the United States but is readily available on foreign versions of Amazon. 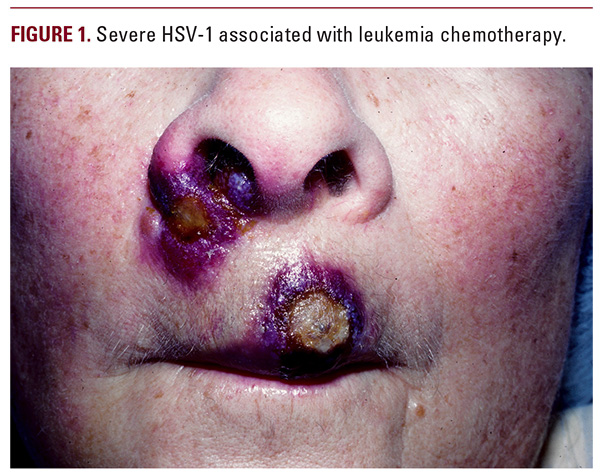