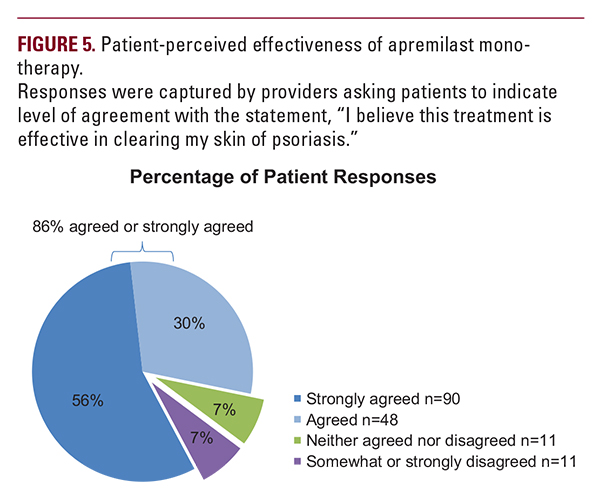 systemic-experienced patients had mean PGA scores of 2.79 and 2.48 and mean psoriasis-affected BSA of 17.85% and 12.93%, respectively. Their baseline demographic characteristics and pattern of comorbidities were also reflective of the broader population of US patients with moderate to severe psoriasis, with >50% having psoriasis-related comorbidities.1,12-14 Most patients who switched to apremilast monotherapy were previously receiving only topical therapy, indicating inadequate treatment and a possible place for apremilast in the treatment of patients with psoriasis immediately after topical therapy is no longer adequately managing symptoms. The current ndings from dermatology clinical practices confirm those from the phase 3 ESTEEM 1 and 2 clinical trials, which demonstrated efficacy of apremilast in patients with moderate to severe plaque psoriasis.9,10 Approximately one-quarter of patients achieved low disease severity as measured by PGA of 0 or 1 after approximately 2 months of apremilast therapy, which is consistent with reductions in PGA observed in apremilast clinical trials.9,10 In our study, PGA and BSA scores were each significantly reduced by approximately 60% with apremilast monotherapy within 6 months of treatment initiation, regardless of whether patients were systemic-naive or systemic-experienced. Patients who were systemic-naive had slightly better efficacy responses, indicating that these patients might be a more appropriate population for apremilast than systemic-experienced patients. Clinically significant reductions in itch were seen in both systemic-naive and systemic-experienced patients.15 Although the decrease in itch NRS did not reach statistical significance in systemic-naive patients, systemic-experienced patients reported a significant reduction within 6 months after apremilast initiation, approaching a score of 0 approximately 5 months after apremilast initiation and complete resolution in some patients.The majority of patients (86.2%) considered apremilast to be effective in clearing their skin of psoriasis, suggesting a high level of patient satisfaction with treatment. Both treatment experience groups had reductions in body weight that were comparable to those observed in clinical trials of apremilast.9,10

Based on this retrospective, multicenter, longitudinal, observational cohort study using an EMR database, apremilast was prescribed to patients with features typical of a population with moderate to severe psoriasis, including a high prevalence of comorbid conditions. With up to 6 months of apremilast mono-therapy, psoriasis severity was reduced as measured by PGA and BSA, regardless of whether patients were systemic-naive or systemic-experienced, with slightly better responses seen in the systemic-naive patient population. Most patients considered apremilast to be effective in reducing their psoriasis symptoms.

The authors received editorial support in the preparation of this report from Amy Shaberman, PhD, of Peloton Advantage, LLC, Parsippany, NJ, USA, funded by Celgene Corporation, Summit, NJ, USA. The authors, however, directed and are fully responsible for all content and editorial decisions for this manuscript.