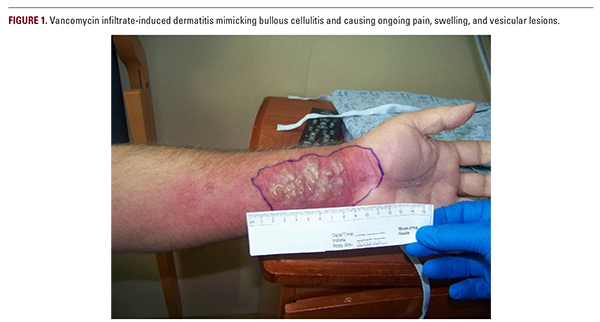 resulted from the systemic administration of vancomycin and ensuing immunological reactions to the agent. If administered too rapidly, an acute release of vasoactive mediators like histamine can result in the pseudoallergic drug reaction known as “red-man syndrome,” which is commonly accompanied by flushing, rash, hypotension, dyspnea, wheezing, urticaria, and pruritus.8 Other vancomycin-induced complications involving the soft tissue include Stevens-Johnson syndrome (SJS),9 toxic epidermal necrolysis (TEN),10 leukocytoclastic vasculitis,11 drug rash with eosinophilia and systemic symptoms syndrome (DRESS Syndrome),12 and linear immunoglobulin A bullous dermatosis (LIBD).13 Despite offering a wealth of data on these dermatologic adverse reactions associated with vancomycin, the literature provides relatively limited reports of information regarding the extravasation of the chemical itself.4,14,15If vancomycin extravasation is suspected or occurs, the infusion should be stopped immediately. However, the cannula or needle should only be removed after attempting to aspirate as much of the drug and surrounding fluid as possible, drawing back 3 to 5 mL of blood.16,17 If feasible, the affected limb can be elevated in order to reduce swelling and promote lymphatic resorption of the agent. A cold compress can be administered for 20 to 30 minutes to reduce subsequent inflammation and potential necrosis.18 The process can be repeated every 4 to 6 hours for the next 24 to 48 hours.18 If local inflammation and erythema occurs, 1% hydrocortisone cream can be applied every 6 hours for 7 days or as long as symptoms persist.16,19 A critical but often neglected point of management is action taken Greeneto appropriately document the event. Denoting a line of demarcation with an indelible pen, taking photographs of the affected area, and detailing the size and appearance of the injury are three such steps.19 These items will be included in medical record notes and incident reports and more importantly serve as the baseline for which treatment progression and recovery are based on.Vancomycin is not the sole antimicrobial agent that can cause significant injury via extravasation, or inadvertent leakage of medications with vesicant properties that can potentially lead to infection and other severe long-term complications.4 In general, medications that induce harm when exposed to tissue can be classified as irritants or vesicants. Irritants typically produce self-limiting, local symptoms such as pain, tightness, inflammation, and phlebitis at the injection site or associated vein.20 However, they rarely cause long-term complications and do not result in tissue necrosis.20 On the contrary the leakage of a vesicant is much more toxic, resulting in severe and possibly irreversible effects including blistering, sloughing, and deep tissue destruction or death.20 Although most are known to be irritants, some antimicrobials have been classified as vesicants in select cases.4,19,20,21In addition to vancomycin, antimicrobials such as acyclovir, amphotericin, gentamicin, piperacillin-tazobactam, penicillin, pentamidine, cefotaxime, metronidazole, ciprofloxacin, doxycycline, ampicillin, erythromycin, foscarnet, nafcillin, oxacillin, ganciclovir, tetracycline, and trimethoprim-sulfamethoxazole