Use of Isoquercetin in the Treatment of Prurigo Nodularis 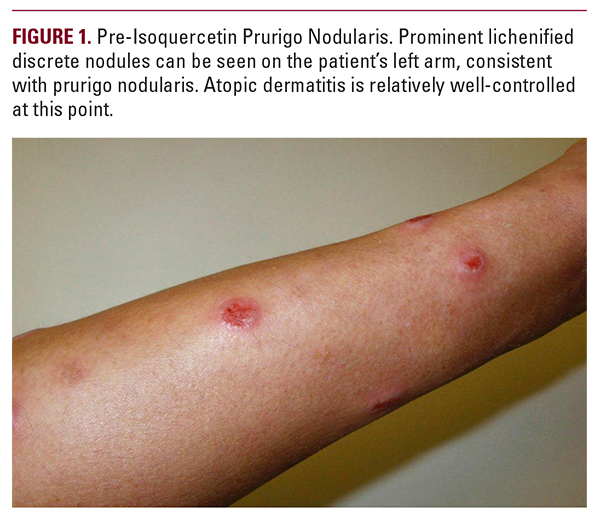 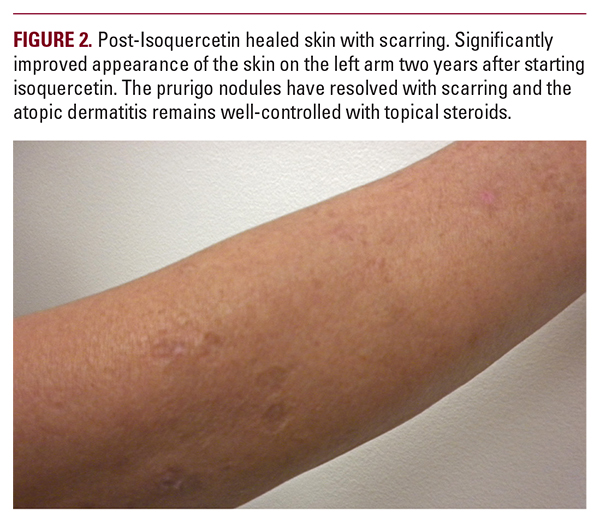 and hamster peritoneal and mucosal mast cells.4,6,7 It decreases release of tryptase and IL-6 and inhibits mast cell degranulation in human mast cell (HMC)-1 cells by down-regulating histidine decarboxylase mRNA. Moreover, it has direct gram-positive and gram-negative antibacterial properties.8Isoquercetin is the glycoside derivative of quercetin and has a different pharmacokinetic profile. Quercetin’s oral bioavailability is highly affected by dietary fat content, with greater fat content leading to greater quercetin absorption and delayed elimination.6 Peak plasma levels occur 0.7-to-7 hours following ingestion and the half-life is approximately twenty-five hours. Quercetin is subject to first pass metabolism and strongly binds to plasma albumin, further decreasing the effective available compound. While the majority of pharmacokinetic research has been done on the parent compound, quercetin, several studies investigating isoquercetin pharmacokinetics in animals show that it is roughly three times more bioavailable than quercetin and is absorbed up to twice as quickly.4,6,9 Diet composition, specifically dietary fat content, has less impact on its absorption. Additional pharmacokinetic information, including absorption and bioavailability in humans, is lacking.Quercetin and isoquercetin are generally well tolerated. The most common side effect is gastrointestinal upset and, rarely, patients will complain of headaches or mild peripheral paresthesias.7 The potential mutagenicity of quercetin is less clear. Early toxicity data derived from in vitro studies and a report by the Federation of American Societies for Experimental Biology indicated carcinogenicity in laboratory animals with long-term exposure to high-dose quercetin.4,7 It is unclear if isoquercetin differs from quercetin in its toxicity. However, other long-term studies and large clinical human trials have reported inverse relationships between isoquercetin consumption and the incidence of cancer Basakand actually support antimutagenic and genoprotective properties in vivo. Much of the data indicating quercetin’s mutagenicity is derived from in vitro and animal studies, whereas its protective properties have been shown in human trials. More recent reviews of quercetin safety concluded that orally administered quercetin is unlikely to cause significant adverse effects.4,7The average diet supplies between 15 and 40 mg of quercetin per day from fruits and vegetables. Therapeutic quercetin doses are much higher and can be obtained from dietary supplements in the form of capsules (250 mg, 300 mg, and 500 mg) and tablets (50 mg, 250 mg, and 500 mg). While recommended doses for isoquercetin have not been determined, recommended adult quercetin doses for treatment of allergies and chronic hives range from 250 to 600 mg three times per day.4The complex factors underpinning pruritus make a universally effective treatment difficult to attain.10 However, our patient with AD and PN experienced a clinically significant improvement in pruritus after the addition of isoquercetin. Despite isoquercetin’s anti-allergic and antihistamine properties, additional mechanisms of action are probable and remain to be elucidated. Importantly, pharmacokinetic, dosing, and safety data on isoquercetin are limited and need further study. Although future experimental trials are needed, isoquercetin may be another tool in the arsenal against pruritus.

The authors have no conflicts of interest or financial disclosures to declare.