Advancing the Understanding of Seborrheic Keratosis

may also play a causative factor in the mutation of FGFR3, the most common mutation associated with SKs.8 Histology The three classic histologic features of SKs include hyperkeratosis, acanthosis, and papillomatosis. In 2016, Roh analyzed the clinical and histopathological features of SKs from 271 pathology slides of clinically diagnosed SK as well as 206 cases of biopsy-proven SKs.12 The major histopathological variants identified in the 206 biopsy-proven SK cases included acanthotic (45.1%), mixed (19.9%), hyperkeratotic (17.0%), melanoacanthoma (9.2%), adenoid (4.4%), clonal (2.4%), and irritated (1.9%) types. The acanthotic type was the most common subtype located on sun-exposed sites, the adenoid type was only observed on sun-exposed areas and the hyperkeratotic type occurred more frequently on nonexposed area. There were 26 clinicopathological mismatch cases among biopsy-proven SKs. The most common diagnoses mistaken for SK were verruca vulgaris (26.9%), verruca plana (15.4%), basal cell carcinoma (11.5%), squamous cell carcinoma (7.7%), compound nevus (7.7%), actinic keratosis (3.8%), Bowen disease (3.8%), melanoma (3.8%), condyloma acuminatum (3.8%), intradermal nevus (3.8%), and soft fibroma (3.8%). Premalignant and malignant diagnoses represented 23.1% and 7.6% of the mismatch cases. Of the 271 clinically diagnosed SK cases, 180 were proven to be SK and 91 were found to have alternative diagnoses. The 91 lesions that were most commonly clinically misdiagnosed as SKs were verruca vulgaris (27.5%), actinic keratosis (14.3%), compound nevi (6.6%), intradermal nevi (5.5%), lichenoid dermatitis (5.5%), basal cell carcinoma (2.2%), squamous cell carcinoma (2.2%), Bowen disease (3.3%), and miscellaneous (30.8%). Premalignant and malignant entities represented 17.6% and 6.6% of the mismatch cases, respectively. These mismatches occurred significantly higher for sun-exposed lesions than for non-exposed lesions. It is important to note that a Maize study of nonmelanoma skin cancers in association with SKs reported that all malignant lesions found in their study were associated with SKs on sun-exposed skin and were of the adenoid type.22 Based upon this data, Roh suggested that SKs on sun-exposed skin be biopsied and analyzed to exclude premalignant or malignant lesions. 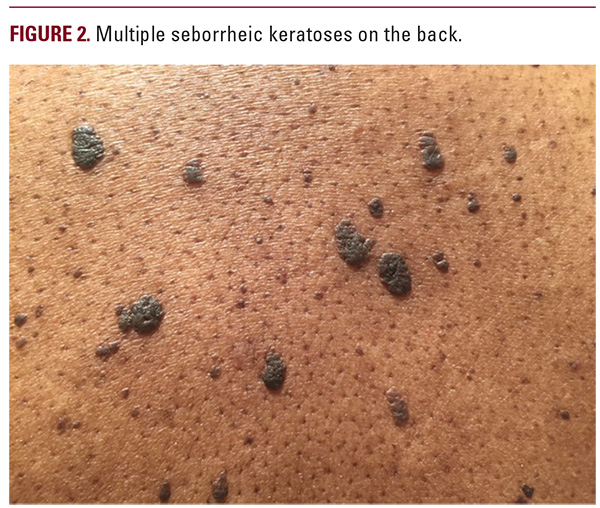 Izikson studied 9204 consecutive pathology reports containing the diagnosis of SK in the clinical information field, between the years 1992 and 2001, and identified 61 cases (0.66%) of melanoma.18 All histologic types of melanoma were represented. These authors concluded that melanoma can mimic SKs and they strongly supported submitting all specimens for histological examination. Effective Diagnosis and Evaluation Criteria As the diagnosis of SKs is primarily clinical, the ability to accurately identify SKs and rule out a malignant lesion is critically important. SKs may be difficult to distinguish from cutaneous malignacies including pigmented basal cell carcinomas, squamous cell carcinomas, or malignant melanoma.12 Lin validated a two-step dermoscopy evaluation for 416 clinically suspected SKs with step one consisting of indentifying multiple milia-like cysts; comedo-like openings; fissures/ridges (brain-like appearance); light-brown fingerprint-like structures; and the lack of blue-grey or blue-white color. Step two identifies sharp demarcation, mica-like structure, and yellowish color.23 The two-step algorithm when optimized, achieved a sensitivity of 95.7% and a specificity of 78.3%. Additionally, they identified a total of 12 dermoscopic patterns for SKs. Carrera evaluated 134 cases of SKs and determined clues for diagnosing melanomas that resemble SKs.24 They reported that the most helpful criteria in correctly diagnosing SK-like melanomas were the presence of blue-black sign, blue-white veil, pseudopods or streaks, and pigment network. Multivariate analysis found only the blue-black sign to be significantly associated with a correct diagnosis, and hyperkeratosis, fissures, and ridges were independent risk markers of dermoscopically SK-like melanoma. Cornice evaluated the role of immunosuppression in squamous cell carcinomas arising in SKs (SCC-SK).25 SCC have been described to arise from SKs due to malignant transformations of the keratinocytes. However, it is unclear if the SCC actually arises in the SK or represent a collision tumor. The 162 cases of SCC-SK displayed features of SKs but the areas of SCC were characterized histologically by areas of squamous dysplasia, hypogranulosis, squamous eddies, solar elastosis, and brown pigmentation. Furthermore, patients with a history of