Advancing the Understanding of Seborrheic Keratosis 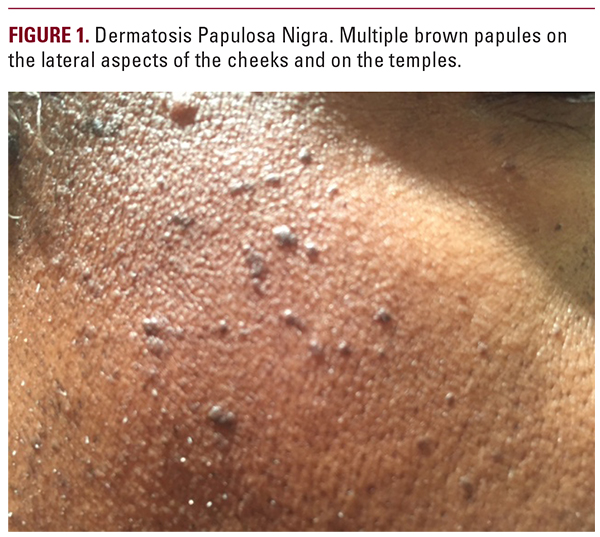 present in the germline. Therefore, other mechanisms likely contribute to familial SKs. It is now known that more than 80% of SKs have at least one oncogene mutation and 45% have more than one mutation, including FGFR3, PIK3CA KRAS, and/or EGFR.20 Although SKs contain oncogenic mutations that are present in other malignancies, SKs remain benign. Thus, SKs may provide insights for the prevention or treatment of malignancies. Akt, also known as protein kinase B, plays key roles in cell proliferation, cell cycle progression, survival, metabolism, and apoptosis. Akt overactivation contributes to many pathophysiological conditions, from cancer to SKs. Newer investigations have revealed that both FGFR3 and PIK3CA impinge on Akt kinase. SK cells are characterized by overactive Akt signaling but they are not associated with oncogenesis and remain clinically inert indefinitely according to Neel.21 High levels of Akt activity underlie the defect in cornification of SKs in which some cells live too long and other undergo inappropriate intraepithelial cornification (pseudocyst formation). Additionally, SKs unlike squamous cell carcinomas, were found to be hypersensitive to inhibition by ATP-competitive Akt inhibitors, A-443654, and GSk690693, which can lead to rapid cell death through apoptosis. Age Although SKs are clearly associated with an older population, Yeatman examined 100 Caucasian Australians and identified SKs in 12% of those ages 15-25, 79% in those ages 26 to 50 and 100% of those over the age of 51.6 Additionally, the number of SKs increased with advancing age with those ages 15-25 having 6 SKs and those older than 75 who had 69 SKs. An increasing prevalence of SKs with age but the clear occurrence during youth was supported by a larger study by Gill who examined a larger number of Australian Caucasians.4 In 170 subjects studied, there was a 62% chance of having an SK with each 5 years of advancing age. Additionally, there was an increase in the size of SKs with age. Kwon evaluated 303 Korean males, Fitzpatrick Skin Types 1-V, between the ages of 40 and 70 years and found a prevalence of SKs of 88.1%.7 Consistent with the Caucasian population, there was an increase in prevalence of SKs with advancing age with 78.9% at 40 years to 93.9% at 50 years. The trend of increasing number of lesions held in this darker skinned population, with 5.5 lesions at 40 years, 9.2 at 50 years, and 13.4 at 60 years. However, the total number of SKs was lower in the Korean population (9.2 lesions at age 50 and 13.4 at age 60) as compared to a Caucasian population (23 lesions at ages 51-75). Ultraviolet Light Yeatman reported a higher prevalence of SKs on sun-exposed areas of the body in their 100 Caucasian Australian subjects as compared to non-exposed areas when taking into account surface area.6 Although absolute numbers of SKs were highest on the trunk (54.7%), when accounting for body surface area, the dorsum of the hands (15.2% of the total), and the head and neck area (11.4% of the total) were over-represented as a proportion of total skin surface area. Additionally, the investigators noted that SKs on exposed areas were more often flat and greater than 3 mm in diameter than those on non-exposed areas. Similar results in regard to sun exposed sites were reported by Gill et al who noted in their 170 subjects, that although the distribution of SKs was predominantly truncal, this location only accounted for 36% of body surface area.4 Kwon also reported excessive sun exposure as an independent risk factor for SKs.7 There was a prevalence of 80.5% on sun-exposed areas (face 32.8% and dorsal hands 17.8%) and 60.4% on partly sun-exposed areas (trunk, arms and inner forearms, and legs) in the study. Lifetime cumulative sunlight exposure of more than 6 hours per day was associated with a 2.28-fold higher risk of SKs than a sun exposure of less than 3 hours per day. These authors reported that sunlight causes multiple smaller SKs and that sunlight is a factor in the development and growth of SKs. In addition, 38.9% of the SKs were classified as dark in color (black, dark brown, and brown) and 61.1% light in color (light brown 94.7% and pink 5.3%). As SKs contain melanocytes, sun-exposure may stimulate pigment production and the transfer of melanin from melanocytes to keratinocytes. This likely explains the fact that all but 5.3% of SKs in the Korean males were pigmented. SKs on exposed skin were darker in color than those on partly exposed skin. Logie proposed that in addition to ultraviolet exposure being an independent risk factor for the development of SKs, that UV