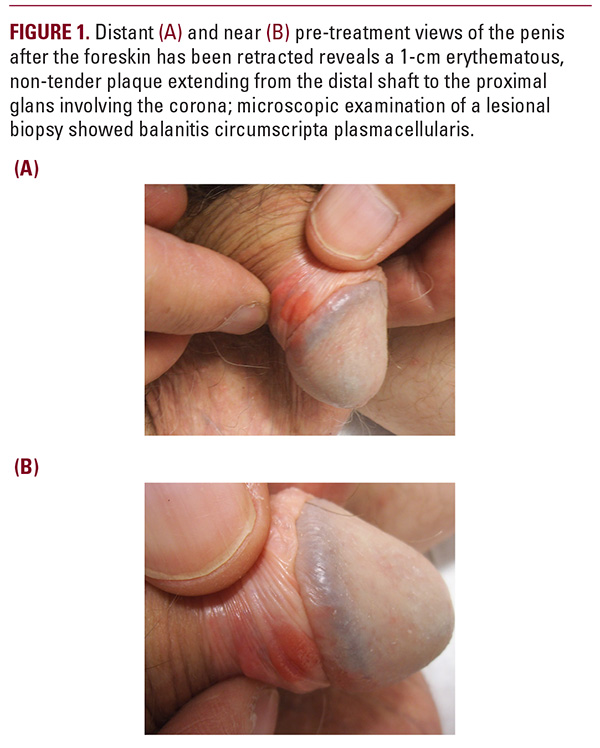 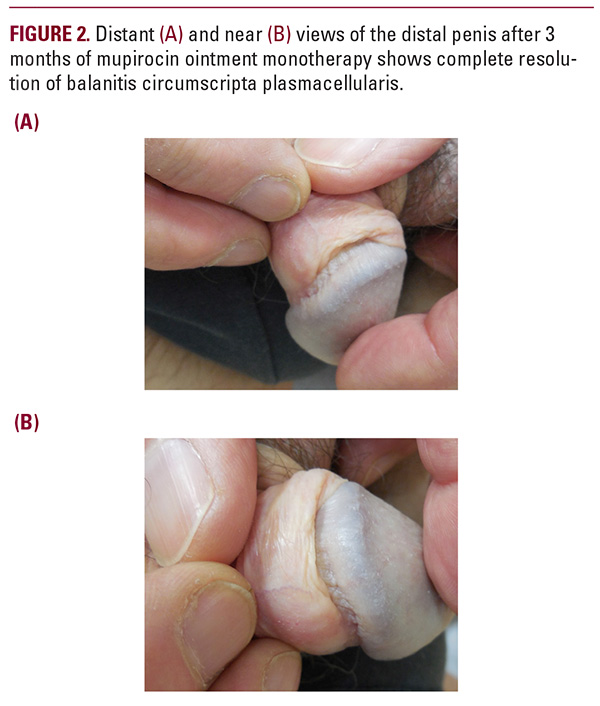 middle-aged to elderly men; patients range in age from 20 to 88. The vast majority of those affected are uncircumcised.1 Zoon balanitis typically presents as a solitary, well-circumscribed, shiny red-orange plaque on the glans or prepuce. The surface of the plaque may exhibit characteristic small dark red stippling described as “cayenne pepper spots”. Most patients are asymptomatic, however mild pruritis or tenderness may occur.2 The diagnosis of Zoon balanitis is primarily made based on clinical and pathology findings, however other diagnostic modalities have been researched; Arzberger et al recently demonstrated successful diagnosis of Zoon balanitis and differentiation of it from carcinoma in situ using reflectance confocal microscopy.3Histopathologic evaluation of the lesion typically reveals a characteristic dense inflammatory infiltrate below the epidermis, predominantly of plasma cells, along with a proliferation of vertically oriented vessels.2 Other findings may include atrophy of the epidermis, loss of the rete ridges, and spongiosis. An important distinction is the absence of vesicles and keratinocyte dysplasia.The differential diagnosis of Zoon balanitis includes erythroplasia of Queyrat, fixed drug eruptions, herpes simplex virus, lichen planus, lichen sclerosis et atrophicus, pemphigus Cohenvulgaris, psoriasis, and secondary syphilis. An analogous lesion affecting females which shares its clinical and histologic features exists, described as vulvitis circumscripta plasmacellularis.4 Other analogous lesions have been described in different mucosal sites, most recently in the perianal region5; altogether, these lesions comprise a condition known as plasma cell mucositis. Multiple theories exist regarding the pathogenesis of Zoon balanitis. Mallon et al suggested that Zoon balanitis represented a chronic irritant contact dermatitis, where the presence of foreskin promotes inflammation by a Koebner phenomenon.6 Indeed, the fragile skin of the glans is also prone to inflammatory changes from the effect of infectious or exogenous agents. In contrast, Balato et al consider Zoon balanitis as pre-malignant; they observed a man who developed penile carcinoma arising from biopsy confirmed Zoon balanitis.7 However, such circumstances are rare. Chronic Mycobacterium smegmatis infection, friction, heat, hypospadias, an IgE-antibody mediated response, and lack of hygiene have been proposed as predisposing factors in the development of Zoon balanitis. A T-cell mediated mechanism has also been suggested given the efficacy of treating with calcineurin inhibitors, which act by suppressing T-cell cytokine release and activation.8 Our patient’s response to topical mupirocin ointment raises the possibility of a bacterial infection or superantigen in the pathogenesis of Zoon balanitis.