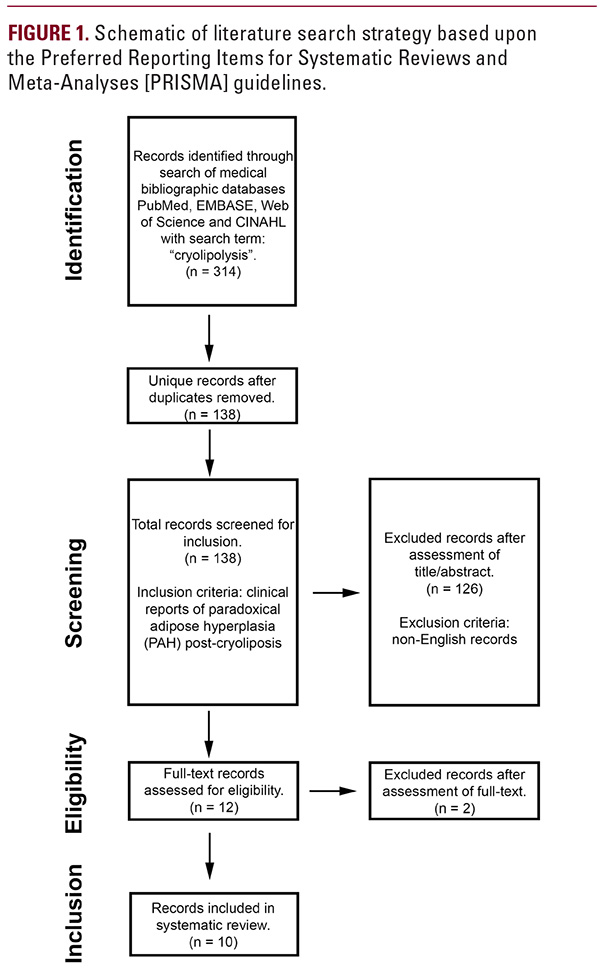 the continuing popularity and high volume of cryolipolysis pro- cedures performed may suggest that PAH may not be a "rare" adverse effect. In addition, we propose that the number of con rmed cases of PAH may be underreported due to a lack of published cases in the medical literature, and/or patients possibly feeling more self-conscious after "unintentional fat gain" post-cryolipolysis or other reasons, resulting in loss to follow- up or delays in PAH diagnosis. According to published evidence, PAH may impact certain demographics disproportionately. Interestingly, review of the published literature may indicate that men may have a predisposition to PAH post-cryolipolysis as we identified 10/16 cases with male patients. However, this may not be true as the man- ufacturer’s data reported that 55% of patients with PAH were men.24 Furthermore, as only 15% of reported total patients who received cryolipolysis were men, the relative number of PAH cases is much higher for men compared to women. In addition to a sex predisposition, genetic predisposition is a possibility. We identified 2 sets of twins who all developed PAH post-cryo- lipolysis.16,19 Of note, PAH occurred more frequently in patients of Hispanic and Latino descent compared to other ethnicities, which poses the question if PAH may be multifactorial as it may be associated with sex, genetics, lifestyle, and/or environmental factors.21 The exact pathoetiology of PAH remains to be elucidated, but researchers have proposed several mechanisms of PAH development.13 We hypothesize that not all adipocytes are affected by fat freezing and are phagocytized by macrophages, which may result in hyperplasia of remaining adipocytes as these adipocytes may be "naturally selected" for survival. These "naturally selected" adipocytes may have changes in their receptor expression and signaling factors associated with adipocyte metabolism resulting in adipose hyperplasia.It is known that hypoxic injury to adipocytes may increase vas-cularity by release of hypoxia-inducible factors (HIFs), which initiates a signaling cascade toward angiogenesis and potentially adipose hypertrophy and hyperplasia.25 Additionally, cooling of the adipocytes without cell rupture may lead to hypoxic injury and result in rebound hypertrophy and hyperplasia of adipocytes.18 Histopathology of PAH demonstrates septal thickening, which may be a result of reactive brosis stemming from hypoxic injury in adipocytes.13 The result of hypoxic and physical injury may increase blood ow and stimulate adipocyte proliferation, which may support the theory of survival of "naturally selected" adipocytes. Cryolipolysis may also have ef- fects on the recruitment of resident or circulating pre-adipocyte or stem cell population, which has previously been reported to result in adipose hypertrophy.26 Instances of transient decreased sensation at the treatment area has been reported post-cryolipolysis, and studies have shown that sympathetic denervation of adipose tissues can induce pre-adipocyte and adipocyte proliferation in animal models.27 There is currently a paucity of published evidence supporting this theory in clinical studies. We believe it is possible that sympathetic denervation of adipose tissues could occur intra- or post-cryolipolysis, however future studies may perform additional histology staining or molecular assays for con rmation. A different hypothesis is that the negative pressure suction from cryolipolysis may have a stimulatory effect on adipocytes.18 This hypothesis is based upon the observed effects from the BRAVA system (Brava, LLC, Miami, FL), which is a negative pressure vacuum-based external breast expander to stimulate the body to generate a vascularized scaffold that is later suitable for fat grafting.28 As previously stated above, we hypothesize that cryolipolysis may have a stimulatory effect on the "naturally selected" adipocytes for survival. However,