skin are an integral part of the innate immune system. These bacteria contribute to protection against pathogen growth by competing for nutrients and space.3 Some bacteria directly restrict the growth of competitors via production of antimicrobial compound peptides (AMPs) that can inhibit reproduction of closely related species without affecting the organisms producing them.3 Those AMPs are called bacteriocins and are very similar to β-defensins secreted by skin cells to regulate speci c bacterial population that are overrepresented and detected by the immune system via toll-like receptors (TLR)TLR2 andTLR4, respectively, for gram-positive and gram-negative bacteria.3 Commensal bacteria can also provide protection against in- ammation. Bacteria from normal skin, such as S. epidermidis, have been shown to suppress in ammation by inducing the secretion of interleukin-10, an anti-in ammatory cytokine, by antigen-presenting cells.37,38 S. epidermidis, as all gram-positive bacteria, also secretes speci c lipoteichoic acids that inhibit both in ammatory cytokine release from keratinocytes and in ammation triggered by injury through a TLR2-dependent mechanism.38,35 Interplay Between Skin Cells and Bacteria in Host Defense and Inflammation There is a balanced interplay between the host cells and resi- dent and/or transient bacterial populations that is continuously affected by intrinsic (host) and extrinsic (environmental) factors (Figure 1).These factors alter the composition of the skin micro- organism community and may in uence skin barrier function by inducing an unbalanced microbial state or dysbiosis that may be evidenced in chronic in ammatory skin diseases, such as atopic dermatitis, psoriasis, rosacea, or acne.20,16,39,40 The composition of bacterial communities depends on skin characteristics, such as sebaceous gland concentration, mois- ture content, and temperature, as well as on host genetics and exogenous environmental factors.7 For example, defects in the skin structural barrier permit penetration of the epidermis by chemical, allergic, and/or infectious agents. This may result in chronic in ammation and a loss of microbial diversity with an associated increase in Staphylococci, including S. aureus.41 Skin cells can also affect microbiota by providing speci c nutrients or through the synthesis of antimicrobial peptides (Table 1).10 The microorganisms that are living on the skin are also under the in uence of its water content.18 The influences of other factors are less well understood,39 but there is limited information about the effects of some of them. Antibiotics, corticosteroids, radiotherapy, and chemotherapy can all in uence the composition of the skin microbiota.42,12,6,8,4,43,44 It has also been shown that frequent hand washing disturbs skin barrier function, resulting in irritation and changes in the hand skin microbiota.42 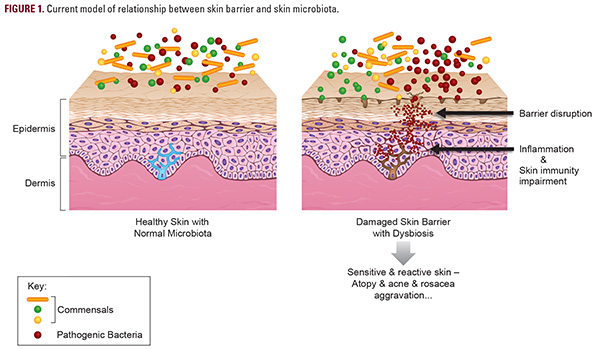