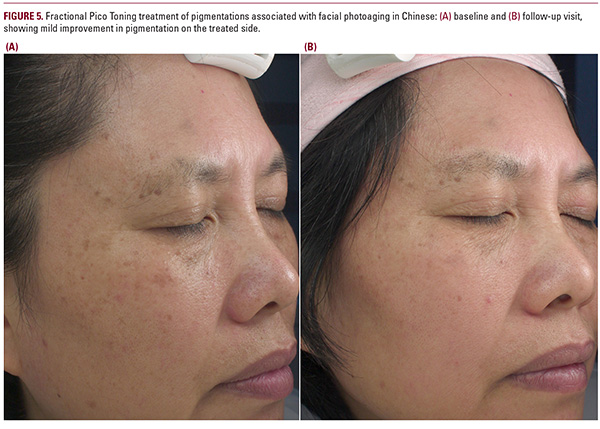 were all improved after three sessions of treatment.15 Though the treatment process was moderately painful, it was generally tolerable for most subjects with no topical anesthetic.Among various Q-switched laser systems, Q-switched Nd:YAG Laser is the most widely used technology in aesthetic laser practice in Asia for the treatment of photoaging and melasma.8,18 QSNYL toning, like most other non-ablative resurfacing procedures, relies on thermal injury in the targeted tissue which induces collagen remodelling while sparing the epidermis.19 With relatively large spot sizes and low fluences, QSNYL has proved to be an effective rejuvenation modality in Asians.8 Dual-pulsed QSNYL, which was recently introduced may enhance its clinical efficacy.20 Given that different assessment tools and study protocols were followed, it is difficult to make a direct comparison between QSNYL toning and Fractional Pico Toning. Nevertheless, the latter seems to be safer based on current clinical results.14,15,21 To ensure efficacy, QSNYL toning requires multiple passes / sessions or increased fluences in order to reach a clinical endpoint of pinpoint bleeding at each treatment.8 This may lead to a longer downtime and increased risk of post-inflammatory dyspigmentation in Asian patients, rendering it less desirable as a noninvasive procedure. As shown in the present study, the clinical endpoint for Fractional Pico Toning, moderate erythema, was achieved through less aggressive treatment parameters than that of QSNYL toning. Furthermore, two to three passes for Fractional Pico Toning were required to achieve the desired clinical endpoint which was less than most traditional QSNYL toning needs. Thus a better safer profile can be expected. For those patients with melasma, a refractory pigmentary disorder often complicating photodamaged skin in Asians, QSNYL may also exacerbate the lesion or even induce mottled hypopigmentation.22 Fractional Pico Toning, unlike QSNYL, delivers the laser energy in a fractionated manner. Using a specialized diffractive lens array, the picosecond alexandrite laser creates multiple micro-treatment zones with concentrated focal energy at approximately 15J/cm2 for the 6mm spot, leading to enhanced efficacy due to high peak energy. However, only less than 10% of the skin is treated with peak fluences. The surrounding skin is exposed to much lower fluences with an average fluence of 0.71J/cm2 (6mm spot) over the entire treated area, thus minimizing collateral damage to the epidermis.21 The