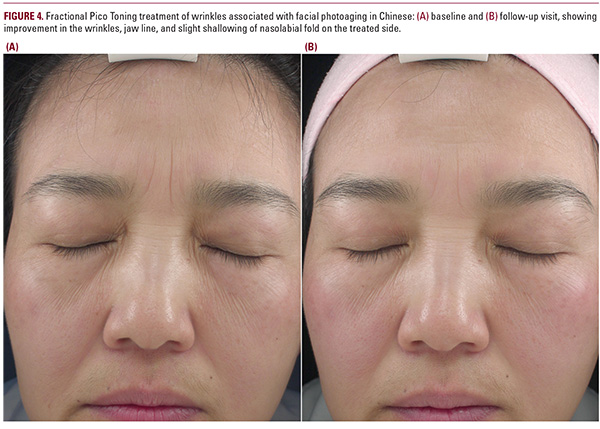 post-treatment. The mean scores of VAS for each session was 6.3, 6.9, 6.0, and 6.4 out of 10, respectively, which indicates a moderate level of pain. However, it was well tolerated by all subjects. No significant differences of pain level were found among four treatment sessions (P=0.122). Transient erythema was the main complication after the treatment, which normally subsided in less than 24 hours. Mild edema was seen once in one subject which resolved along with the erythema in few hours. No dyspigmentation, exfoliation, or other post-treatment discomfort was noted.

As a novel, noninvasive rejuvenation technology, 755nm picosecond alexandrite laser with diffractive lens array (Fractional Pico Toning) was indicated to be efficacious for Asian facial photoaging in this prospective, split-face study. Based on the scores of Dover’s and Chuang’s scales, the general condition of photodamaged skin achieved significant improvement on the treated side of the face compared to the control side. These results were largely consistent with a previous study on photoaging décolletage in which texture, keratosis, and rhytides