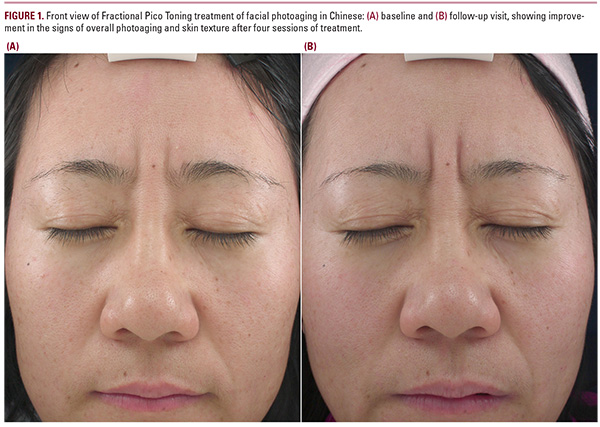 laser toning by shortening the pulse to the picosecond domain. This type of treatment, called “Fractional Pico Toning” has been gaining much popularity among patients with mild-to-moderate degree of photoaging. It involves multiple passes of the diffractive lens array over the targeted tissue which helps to clear the mild-moderate photoaging as well as aid in textural improvements. There is however, only limited clinical research that had been done in Asians. The present study aims to evaluate the efficacy of the picosecond alexandrite laser with a diffractive lens array for the treatment of facial photoaging in Chinese patients.

This is a prospective, evaluator-blinded, open-label, split-face study conducted in compliance with the Declaration of Helsinki. Institutional Review Board (IRB) approval was granted by the local medical research ethics committee. Ten Subjects (10 females) were enrolled in this study, age 30–55, with Fitzpatrick skin type III–IV, and presenting with symmetrical evidence of facial photoaging with a baseline at least grade 2 out of a 5-point global photoaging scale described by Dover et al.16 The exclusion criteria includes a alhistory of resurfacing procedures within last two years, recent severe sun exposure, the use of oral retinoid or other photosensitive medications, active skin infections or inflammatory disorders, history of keloid and hypertrophic scar, severe systemic conditions, pregnancy, and lactation. Informed consents were obtained from the subjects before they were enrolled.