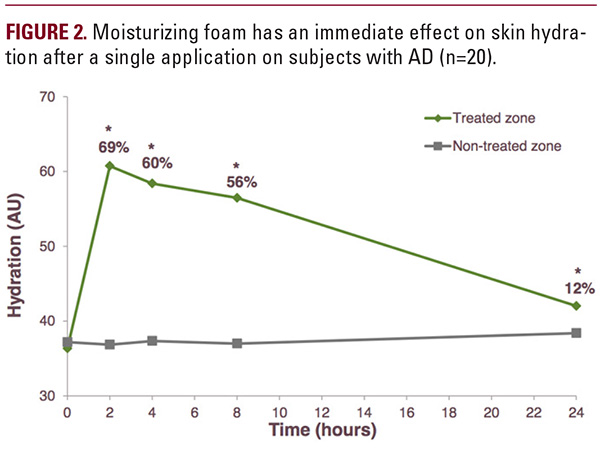 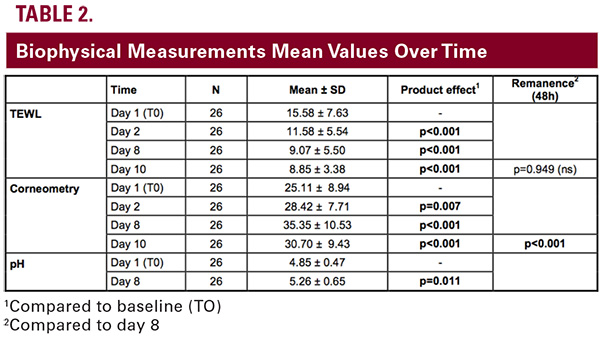 This study was conducted to assess the effect on skin moisturizing, skin barrier regeneration, and itch relief of an anti-itch foam. The anti-itch foam was demonstrated to strengthen the skin barrier, improving TEWL and corneometry significantly after one application and throughout the longer twice-daily application period. It provided an immediate relief of clinical signs of AD, including pruritus as assessed by both the subjects and the investigators. Moreover, it delivered a long-lasting moisturizing effect, comforting of the skin, and improvement of overall skin condition.Associated itch was rapidly relieved and need to scratch significantly decreased within the first hours of the foam use. This anti-itch effect persisted for 48 hours after the last application. The early and durable anti-itch effect, the softening effect on the skin, and the cosmetic properties of the foam (easy to apply, rapidly absorbed) resulted in a 100% compliance. In this study, it was shown that a twice-daily application of the foam induced a skin moisturizing effect detected from the first 24 hours. Following a 1-week treatment period, the skin remained moisturized 48 hours after ceasing product application. The moisturizing effect as assessed by corneometry was long-lasting as it was still observed after 6 hours following a single application but faded after 24 hours, justifying an at least twice-daily regimen. Clinical scores (dryness, scaling, roughness, cracks, and scratch signs) assessed by investigators however were all significantly improved at 24 hours after a single application.Similarly, the regeneration of the skin barrier started as soon as 24 hours following the first application and this improvement was still significant 48 hours after the last product application.In conclusion, in patients with dry, sensitive, and itchy skin prone to AD, the anti-itch foam applied twice daily for 7 days proved to have a very good moisturizing effect and to be able to repair a deficient skin barrier. Associated itch was rapidly and durably relieved and need to scratch significantly decreased as well. These suggest that the anti-itch foam product may play a role in managing symptoms of AD.

Dr. Lio has served as a consultant/advisor and speaker for Valeant, Regeneron/Sanofi and Pierre Fabre, a consultant/advisor for Anacor, AO Biome, Exeltis, Galderma, Johnson & Johnson, Theraplex, and Mission, and has received an honrorium for his work on this supplement sponsored by Galderma.