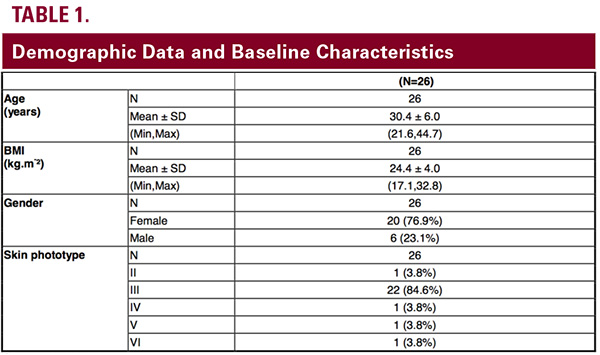 a visual analog scale. Pruritus severity was also assessed by a dermatologist based on evaluation of the skin and interview of the volunteers.The intra-individual difference between before and after application was analyzed using either a Wilcoxon Signed Rank test or a paired Student t-test depending on the distribution of the population, testing the hypothesis of equality. The P-value was to be less than 0.05 to declare significance.

At day 1 (baseline), 100% of patients reported itching and scratching and 88% of patients reported redness. At day 8, 50% of patients (13/26) did not have any itching sensations, 58% of patients (15/26) reported not needing to scratch, and 88% of patients (23/26) did not have redness due to scratching.Clinical scores of dryness, scaling, roughness (P<0.001), and cracking (P=0.002) were significantly improved up to 24 hours after a single application (Figure 1).Corneometry after a single application of product showed that the skin hydration was significantly increased at 6 hours after application and returned to baseline by 24 hours after application (Figure 2).For the 7.5-day repeated application period, the anti-itch foam significantly reduced TEWL (P<0.001) compared to baseline on and beyond day 2. Moreover, skin hydration significantly improved (P<0.001) in the same time period (Table 2). Forty-eight hours after the last application, these improvements still remained significant (P<0.001). These results were further supported by volunteer self-evaluations: the itch intensity and urge to scratch was clearly diminished after just one week of product application. This was confirmed by the dermatologist via the pruritus severity assessments (Table 3). Overall, 7 subjects experienced a total of 8 adverse events of mild to moderate severity. These included rhinopharyngitis, a common cold, headache, and stomach ache and were determined not to be related to the study product. No serious adverse events occurred during the study.

In the past decade, there has been an intense focus on the primacy of the skin barrier in the pathophysiology of AD, particularly with the description of mutations in the FLG gene encoding filaggrin, a key skin protein in barrier function.13,14 However, even in the absence of mutations in FLG, the presence of inflammatory mediators actually downregulates filaggrin production, resulting in a functionally impaired skin barrier.15 At the same time there has been increased attention devoted to itch, the cardinal symptom of AD, but with noted unmet needs for this troublesome problem.16