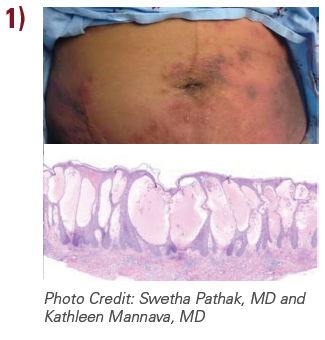 A 39-year-old Hispanic female with no chronic medical problems presented to the emergency department (ED) for a painful and pruritic eruption after cesarean section delivery. In the ED, she was hemodynamically stable with unremarkable lab work and normal WBC, relative eosinophils 6%. ROS was notable for chills but negative for fever, pain, shortness of breath, abdominal pain, nausea, and vomiting. She received one dose of IV vancomycin and a dermatologic consultation was requested. The dermatology consultation service evaluated the patient and performed a shave biopsy for H&E and direct immunofluorescence with the following findings: H&E revealed acute spongiosis with numerous eosinophils. All of the following are in the pathologic differential diagnosis for this patient except: 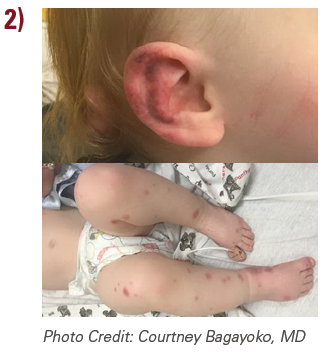 A 13-month-old male presents to the dermatology consultation service for edema and purpura. Three days after his immunizations (influenza, MMRV, Hib, Hepatitis A, and Prevnar) he developed ear redness and swelling. Along with this, he also developed purpuric and targetoid plaques on his face that spread to his arms and legs, as well as some swelling of his hands and feet. In the ED, he was afebrile in no apparent distress. They denied changes in stool, abdominal pain, and joint swelling, redness, or pain. Of note, he had a similar reaction 6 months prior after receiving his first influenza immunization. This reaction prompted referral to an allergist where blood testing was positive for egg allergy and a skin prick test for egg allergy was negative.A skin biopsy was preformed, which revealed leukocytoclastic vasculitis with IgA deposition around the vessel walls What is the correct diagnosis in this patient?. 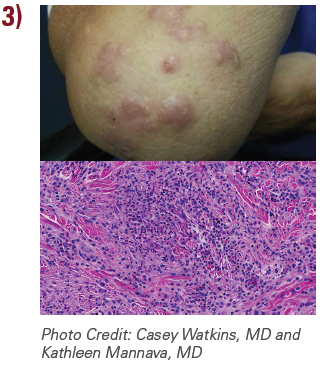 A 72-year-old male with a history of IgA lambda multiple myeloma, severe peripheral vascular disease, and chronic renal failure was referred dermatology for evaluation of an eruption on the bilateral elbows. These lesions appeared shortly after initiation of treatment for multiple myeloma with lenalidomide (Revlimid). He reported gradual improvement over the past 2 years. An exam revealed symmetrically distributed erythematous to violaceous indurated papules and small plaques on the bilateral elbows extending to the extensor forearms. Biopsy of the left elbow showed mixed inflammatory infiltrates composed of numerous neutrophils, nuclear dust, and lymphocytes within the dermis. There were also areas of fibrosis and foci with changes suggestive of chronic vasculitis. What is the most commonly associated underlying condition in patients who present with early onset?