reveals several important items. First, the exact same terms (such as “treatment success”) may be defined differently. Secondly, some investigators relied heavily on visual inspection to determine benefit from drug administration. I would submit that the best assessment of onychomycosis response to treatment includes both clinical and mycologic parameters, regardless of what terminology is used. Finally, almost all the assessments of the percentage of affected nail infected (both before and after therapy) are based on a subjective, visual inspection. The agreement between objective planimetry and subjective estimation is actually quite good (within 10% in 92% of cases seen by experienced investigators).47 Nonetheless, a better practice would be routine use of computerized measurement from a photograph or digital image; this would reduce the likelihood of error and promote more accurate efficacy assessments. A final confounding factor is that efficacy assessments measurements are typically performed on a single target nail, usually the great toenail. While there is usually good correlation between the response of the target nail and response of other nails, this is not always the case.
Assessment of data for tinea pedis, tinea cruris, and tinea corporis studies is somewhat more straightforward due to the uniformity of efficacy parameters. Both older and modern studies include complete cure (sometimes called complete clearance) as the primary endpoint. This consists of negative mycology (KOH and culture) and total absence of signs (erythema, scaling) or symptoms (pruritus). Mycologic cure is virtually always shown as a secondary endpoint. 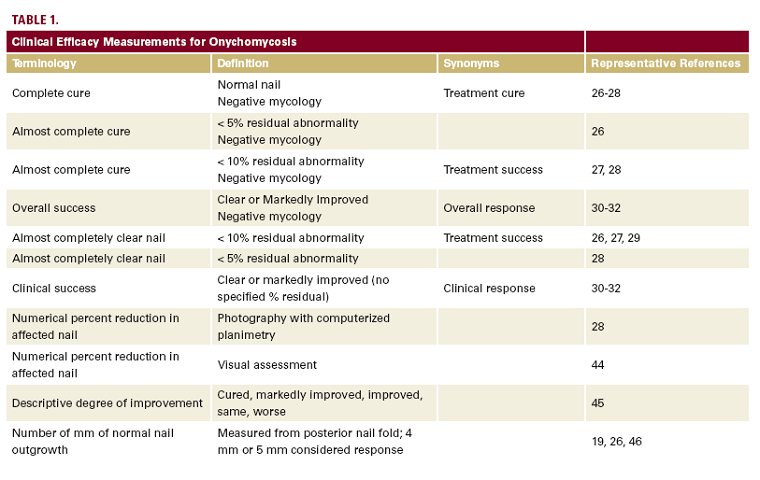 Finally, essentially all studies calculate effective treatment (also known as treatment effectiveness), which consists of negative mycology and no to mild residual signs or symptoms.21-25,37,38 Several studies allow up to mild erythema and scale, but require no residual pruritus.21,23,37 The latter seems optimal, since itching is often the factor driving the patient to seek medical attention. With a quick glance at the data, the HCP will note that there is not much variation in rates for these 3 measurements between drug classes. One item to note is how long after the study was the final assessment made; in other words, is there evidence of sustained benefit?

Despite the HCP’s careful and individualized selection of treatment options, there will be failures and recurrences of dermatomycoses. Even when the infecting fungus ostensibly has been entirely eradicated by antifungal therapy, patients remain at risk for recrudescence. This phenomenon may be due to genetic predisposition, reinfection from within the household, reinfection from shared facilities, underlying co-morbid diseases (eg, diabetes), endogenous or iatrogenic immunocompromise, or, most rarely, mycological resistance.48-51 Obviously,