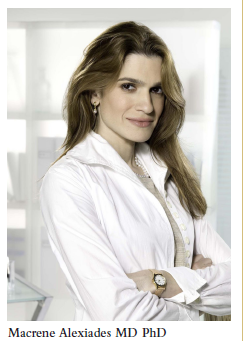 Waves are the propagation of a disturbance in a medium. These include light waves, sound waves, water waves, and even waves on a string. They are characterized by a specified quantity that varies with position and time. Light waves are defined by electromagnetic field variations whereas sound waves are represented by pressure variations in compressions and rarefactions. If one refers back to the de Broglie hypothesis, even matter has wave-like characteristics, the so-called “matter wave” basis of quantum mechanics. Similarly, there is also the “wave-particle duality” of light wherein certain phenomena such as interference, diffraction, and polarization can be explained when light is a continuous wave. In contrast, the Compton effect, which occurs with light of very short wavelengths when rays are scattered, can only be explained by the particle nature of light.
In this issue, we explore the effects of light waves, sound waves, and electric current on skin. We observe the wave-like effects of very long wavelengths, such as radiofrequency, on adipose tissue and dermis. This special issue presents a number of articles on the novel use of acoustic pressure waves on enhancing drug penetration. The application of electric currents is also put forth, which harkens back to Michael Faraday’s discovery that electric currents give rise to magnetic fields. We then come full circle reflecting back to James Clerk Maxwell’s discovery that electromagnetic radiation is actually a train of perpendicular oscillating electric and magnetic fields. It was Maxwell who unified wave motion by proposing that light itself is a form of electromagnetic radiation whose wavelength represents a small portion of the entire electromagnetic spectrum.
Thus, our laser, light, and energy based field so well represented in this issue may more appropriately be renamed “wave science.” Enjoy the issue and the horizons of our field, which are constantly expanding.
Macrene Alexiades MD PhD
Associate Clinical Professor,
Yale University School of Medicine
Director and Founder,
Dermatology and Laser Surgery Center of New York