been associated with pomade acne.11 This variant of acne is less common today than when it was first described over 4 decades ago due to shifts in consumer preferences toward lighter, less greasy hair products. However, it can still be observed and, when it is identified, patients should be counseled on using alternative hair products that are less likely to cause acne, such as silicone-based hair serums (containing cyclomethicone or dimethicone).9,12
The use of over-the-counter topical skin lightening or skin bleaching creams is not uncommon among patients with skin of color, many of whom try such products as a treatment of PIH and other dyschromias before seeking a dermatology consultation. 9 In addition to hydroquinone-based products, some skin lightening creams sold at ethnic beauty supply stores and via the internet illegally contain prescription-strength corticosteroids, such as clobetasol and bethamethasone valerate.13 As such, steroid acne can be seen in this context. Clinical clues to this diagnosis include an acute flare of acne with monomorphous inflamed papules and pustules in association with facial hypopigmentation and atrophy. Patients are generally unaware that such bleaching creams may contain potent corticosteroids and often do not consider mentioning these products to their physician unless asked directly. Therefore, the diagnosis rests on the dermatologist having a clinical suspicion when presented with the aforementioned signs and symptoms. Requesting that the patient bring in all their skin care products is a useful way to detect the inadvertent long-term use of corticosteroids on the face, or other products that may contribute to acne. 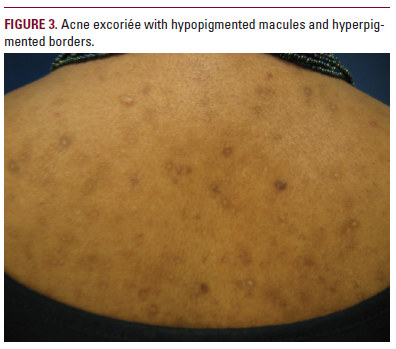 The Role of Inflammation

It has been well established that inflammation plays an integral role in the pathogenesis of acne, particularly in the context of papules, pustules, nodules, and "cysts." However, only recently has the role of inflammation as an early and subclinical event in the development of acne been elucidated.
In a 1996 study, Halder et al14 examined 30 black females with acne, obtaining punch biopsies of lesional skin. Histopathological signs of inflammation were found to be out of proportion to clinical inflammation and extended beyond the boundaries of clinically inflamed lesions. Moreover, even clinically non-inflamed lesions (ie, comedones) exhibited inflammation histopathologically. This subclinical inflammation likely contributes to the high propensity toward PIH in acne patients with darker skin (including those with mild to moderate acne).