The Biology, Structure, and Function of Eyebrow Hair

Perelman School of Medicine at the University of Pennsylvania, Philadelphia, PA 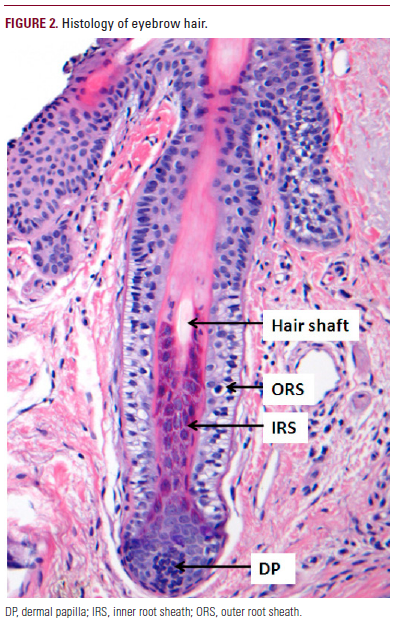 After telogen, the lower, hair-producing portion of the follicle regenerates. As the new hair shaft grows in, the old hair is shed during exogen, and the cycle is repeated.
The exact molecular mechanisms of hair follicle cycling are still being elucidated, and numerous growth factors and growth factor receptors are implicated. Stem cells from the bulge region are believed to be integral to the initiation of anagen and formation of the new hair shaft with each hair cycle. The onset of the anagen stage recapitulates hair follicle development, as the formation of the new lower hair follicle is initiated by signals derived from secondary germ cells. Secondary germ cells are found at the base of the telogen follicle, and are believed to arise from the lowermost portion of the bulge at the end of catagen.13 During late telogen/anagen onset, the dermal papilla stimulates secondary hair germ cells to proliferate, which initiates hair growth and generates the matrix, IRS, and hair shaft. The bulge cells respond by undergoing activation and proliferation later, during the anagen phase. The bulge cells continue to cycle slowly during the anagen phase to extend the ORS and maintain the matrix to support hair growth.14 Many of the mesenchymal-epithelial interactions and secreted signaling molecules critical for hair follicle morphogenesis, such as Wnt ligands and Sonic hedgehog, are required to promote anagen onset and hair follicle growth during the adult hair cycle. The cessation of the anagen stage is controlled by various factors, including epidermal growth factor and fibroblast growth factor 5, which is first expressed in the follicle just before the end of this stage.5
The most common hair disorders are related to aberrations in hair follicle cycling. Telogen effluvium manifests as a transient period of hair shedding, often associated with medications, fever, endocrine abnormalities, parturition, anemia, and malnutrition. It occurs when an increased number of hair follicles prematurely enter the telogen stage, resulting in subsequent hair shedding. Transient shedding typically begins 2 to 4 months after the inciting event and lasts for several months.1 Hair regrowth usually follows, assuming the precipitating trigger is removed. Telogen effluvium is typically limited to the scalp, but may affect other areas, such as the eyebrows or pubic region.

Many hormones play a role in controlling hair growth, the most significant of which are androgens. Androgens contribute to the most common type of hair loss, androgenetic alopecia (AGA), eg, male and female pattern hair loss. Androgenetic alopecia is due to the progressive miniaturization of the hair follicle (transition from terminal hairs to vellus hairs) and shortening of the anagen cycle duration. This miniaturization is due to testosterone and its active metabolite, dihydrotestosterone, acting upon androgen receptors in the dermal papilla.1 These hormones convert vellus hairs to terminal hairs in androgen-dependent areas such as the beard, axillary, and pubic areas during adolescence, yet later in life they can cause miniaturization of follicles in the scalp (resulting in AGA).
The conversion of testosterone to the more potent dihydrotestosterone is catalyzed by the enzyme 5α-reductase (types I and II). The type I enzyme is found predominantly in sebaceous glands and the liver, and the type II enzyme is predominant in hair follicles of the scalp, beard, and chest, as well as in the liver and the prostate gland. Finasteride, which inhibits 5α-reductase type II, slows the progression of AGA by inhibiting 5α-reductase.