The Biology, Structure, and Function of Eyebrow Hair

Perelman School of Medicine at the University of Pennsylvania, Philadelphia, PA

An array of activating and inhibitory secreted molecules orchestrates follicular induction. The initiating signal is thought to arise from the dermal mesenchyme, which induces hair-follicle formation from the overlying epithelium during fetal development. The Wnt/β-catenin pathway is thought to be integral to this process, as it is first upregulated in the upper dermis, initiating the downgrowth of keratinocytes from the epithelium to form the epithelial hair follicle placode.7,8 In the presence of a Wnt signal, cytoplasmic β-catenin translocates to the nucleus where it forms a transcription complex with deoxyribonucleic acid (DNA) binding factors of the lymphoid enhancer-binding factor/T-cell factor (LEF/TCF) family, and activates transcription of target genes.7 An epithelial signal from the placode (likely Wnt and platelet-derived growth factor-A molecules) promotes the clustering of underlying mesenchymal cells, forming a dermal condensate.7 Sonic hedgehog, a secreted protein downstream of Wnt signaling, is required for the proliferation of follicular epithelium and development of the dermal condensate into a dermal papilla.7 In response to a signal from the dermal condensate, the epithelial placode cells proliferate and invade the dermis, eventually surrounding the dermal condensate, forming the hair follicle dermal papilla.7,9 In addition to hair follicle morphogenesis, Wnt signaling is essential during the adult hair cycle, as Wnt activity is observed in the secondary hair germ during anagen onset and in the precortex of anagen follicles during hair shaft differentiation.10
Other genes that are thought to play a role in the spacing and distribution of the follicles during early morphogenesis include lymphoid enhancer-binding factor-1 (LEF1), bone morphogenetic protein 4, and the type II receptor for transforming growth factor β.1,7 Ectodysplasin-A receptor (EDAR), fibroblast growth factor receptor, and bone morphogenetic protein receptor signaling contribute to hair follicle specification and patterning.11 Reciprocal epithelial-mesenchymal interactions promote hair follicle differentiation and maturation of the adjacent dermal papilla, which becomes enveloped by proliferating matrix cells that differentiate into the IRS and hair shaft. The ORS is continuous with the epidermal basal layer and grows downward.11 Hair follicle stem cells are thought to arise early during hair morphogenesis at the placode/germ stage. The stem cells localize to the upper ORS during development, forming the hair follicle bulge.11
Hair follicle development progresses in cephalocaudal direction, becoming first visible in the eyebrows, upper lip, and chin regions at 9 weeks of gestation, with the formation of hair shafts at 16 weeks.12 Approximately 5 million hair follicles cover the human body at birth.1 Although the number of hair follicles does not increase after birth, the size of the follicles and hairs can change (eg, transition of vellus to terminal hairs under the influence of androgens). 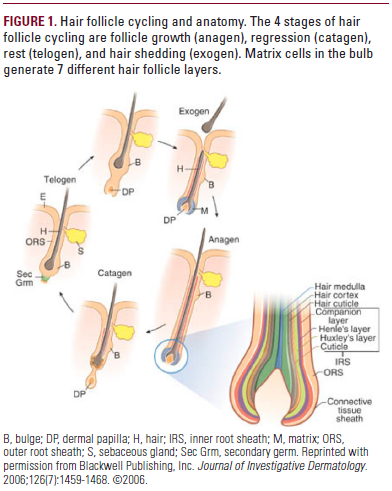 The hair shaft is continuously regenerated in a cycle that consists of 4 stages: hair follicle growth (anagen), regression (catagen), rest (telogen), and hair shedding (exogen) (Figure 1). The entire lower epithelial structure is formed during anagen, during which matrix keratinocytes in the bulb of the lower follicle rapidly proliferate. The duration of anagen is proportional to hair length. For example, human eyebrow hair follicles are short because they stay in anagen for only 2 to 4 weeks,3 while scalp follicles have the capacity to grow long because they can remain in anagen for many years.
The lower portion of the hair follicle regresses during catagen, which occurs through programmed cell death (apoptosis) of follicular keratinocytes as well as melanocytes. Catagen usually lasts 2 to 3 weeks. Toward the end of the catagen stage, the dermal papilla condenses and moves upward, coming to rest underneath the hair follicle bulge.
During the telogen stage, the hair shaft matures into a club hair. Telogen typically lasts for 2 to 3 months. The percentage of follicles in the telogen stage varies substantially according to the region of the body (eg, 5% to 15% of scalp follicles are in the telogen stage at any one time, as compared with 40% to 50% of follicles on the trunk).1 An increase in the percentage of scalp follicles in the telogen stage leads to excessive shedding.