VISIA System: A Possible Tool in the Cosmetic Practice 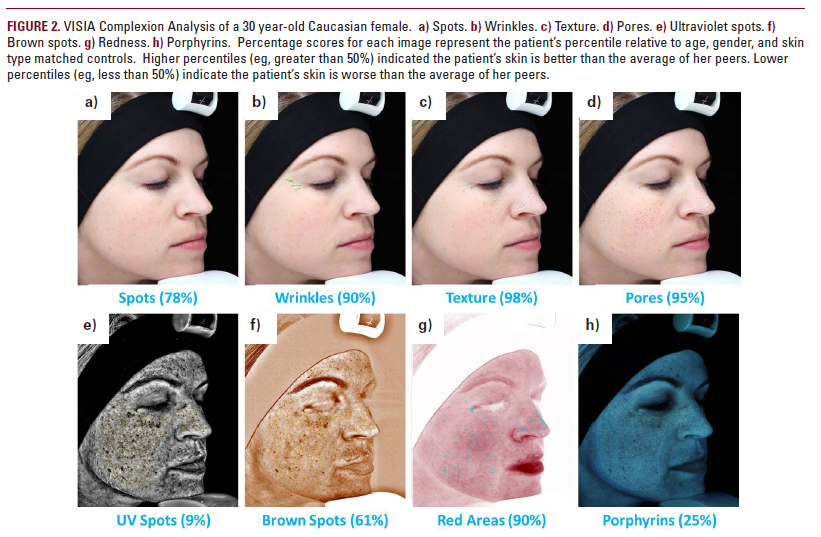 thereby highlighting solar lentigines. Porphyrin fluoresces when exposed to ultraviolet light. Porphyrins are generated by bacteria, specifically Propionibacterum acnes, in the skin. Porphyrin bioburden in follicles and sebaceous glands may correlate with acne or suggest a propensity for breakouts.
Orthogonal, cross-polarized lighting is used to produce the final two images: the brown spot image and the redness image (Figure 2, Table 1). Canfield’s patented RBXTM (Red/Brown/X) technology provides a semi-quantitative assessment of specific chromophores in the skin.3,4 Specifically, it measures the amount of melanin and hemoglobin content. The melanin serves as a proxy for brown discoloration. By using the cross polarized lighting, the VISIA is able to detect deeper deposition of melanin than is detected using the ultraviolet images. From the brown component image, a secondary hyperpigmented spot detection image can be generated. The hemoglobin serves as a measure of the amount of redness in the skin, including background erythema, telangiectasias, and vascular lesions. Similarly, from the red component image a secondary, vascular feature can be used which delineates prominent blood vessels.4
Finally, the VISIA is also able to measure eyelash length. It has potential to measure changes in eyelash length, for example with the use of bimatoprost (Latisse, Allergan, Irvine, CA).
This study assesses the usefulness of VISIA as a tool to help patients better understand their skin complaints.

Subjects were solicited from a general dermatology practice for VISIA skin analysis. Twenty-one consecutive patients underwent an analysis from the VISIA system at no charge and were asked to complete a follow up survey. Twenty-one women agreed to participate. The survey consisted of six yes/no questions and two open ended questions whereby the patients could provide a written response (Table 2).