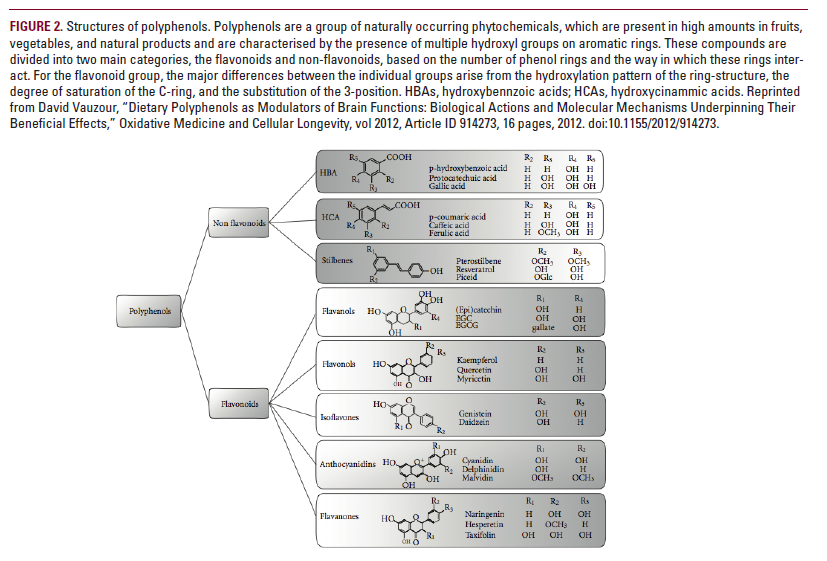 and inhibiting elastase degradation of fibers.28 Isoflavones also reduce UVB-induced MMP-1 expression, thus inhibiting collagen degradation, but have not been shown to influence collagen synthesis de novo.29
Soy protein has perhaps garnered the most attention for its ability to lower cholesterol levels and its antiatherogenic effects attributed to its antiproliferative and antioxidative activity.30,31 Genistein reduces lipid peroxidation, prevents antioxidant enzyme depletion and decreases hydrogen peroxide formation.32 Irradiation of soybeans has been shown to increase the genistein and daidzein content, which was correlated with increased hydroxy radical scavenging activity.33 Genistein protects against hydrogen peroxide induced DNA damage34 and also inhibits UVB-induced apoptotic changes, including caspase 3 and P21.35
Green tea
Green tea is prepared from the plant Camellia sinensis and sold as fresh or dried unfermented leaves. It contains high quantities of monomeric catechins, the major ones being epicatechin (EC), epigallocatechin (EGC), epicatechin gallate (ECG), and epigallocatechin gallate (EGCG).36 Catechins are considered responsible for the physiologic effects of green tea observed in vitro, with EGCG recognized as the most abundant and biologically active polyphenol at the cellular level.37,38 It is believed that tea polyphenols exert their effects by binding to and activating specific cellular membrane receptors. However, recent evidence has revealed that catechins can be incorporated into the plasma membrane, where they can translocate into the cytoplasm in a manner akin to endocytosis and interact with different intracellular molecular targets.39 Catechins exhibit broad antioxidant activity via direct scavenging of free radicals, reduction of inflammatory cytokines and downregulation of ROS producing enzymes. In addition, tea polyphenols have been shown to upregulate SOD, catalase and glutathione peroxidase and act as metal chelators.40 However, there is evidence for significant pro-oxidant activity as EGCG has been shown to induce apoptosis, primarily in cancer cells, via the generation of hydrogen peroxide and superoxide. This dichotomous spectrum of pro and anti-oxidant properties is likely cell specific, but some have suggested that the generation of low concentrations of ROS’s in normal cells may induce cellular resistance to higher levels of oxidative stress.37 Green tea is a UV damage protecting agent inhibiting carcinogenic markers and UV-induced oxidative stress, including suppression of AP-1, NF- ĸB, STAT-1 and the MAPK cascade.4,41 In addition, it protects against PUVA induced