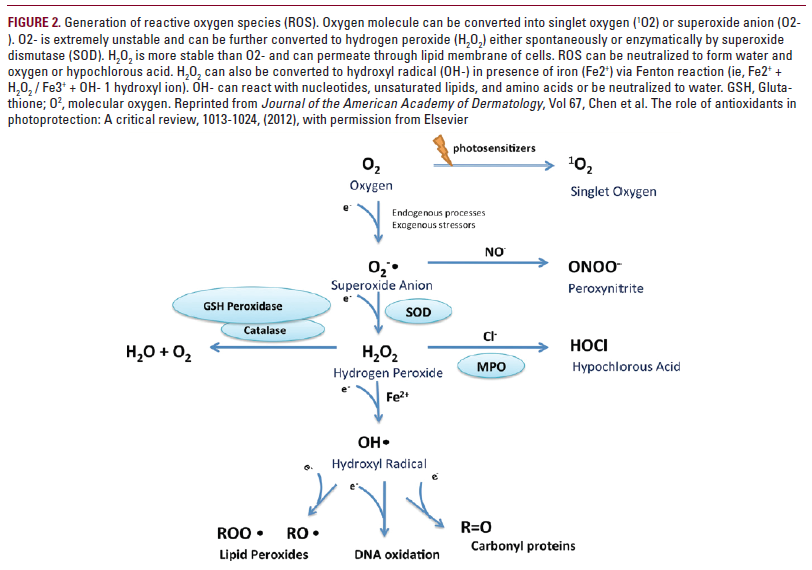 have many potential targets in the inflammatory cascade, such as Bax, Bcl-2, caspases, c-Fos, IĸB kinase, PI3-kinase, and NF-ĸB to name a few.22 The antioxidant capacity of phenolics varies depending on the chemical ring structure, particularly the number and arrangement of hydroxyl group and ring substituents, and the ionization state and stability of resulting phenoxy radicals.23
One common method of classification is to divide polyphenols into flavinoid and nonflavinoid phenolics (Figure 3). All flavinoids consist of two benzene rings linked by a heterocyclic pyrone C ring in contrast to non-flavinoids, which include a heterogenous range of compounds. Flavinoids are the most common polyphenol found in the human diet, with over 4000 identified, and have thus attracted the most attention.17,24 To provide a better understanding of the mechanism of action of natural ingredients, the available data on several commonly used polyphenols will be reviewed and their applications for dermatologic disease, particularly protection from UV damage, will be explored.
Soy
Soy beans are a rich source of isoflavones and contain high concentrations of genistein, daidzein and glycitein. Isoflavones are a type of phytoestrogen, which due to the structural similarity to estradiol can bind to both ER-β and ER-α receptors.25 As an estrogen analog, soy isoflavones have been utilized to treat post-menopausal symptoms, including hot flashes, bone loss and skin ageing. It has been hypothesized that genistein reduces skin damage particularly through estrogen receptor binding, and has been considered as an alternative to hormone replacement therapy (HRT) as a means of avoiding the adverse effects of HRT. In addition to its estrogenic activity, the role of isoflavones in skin ageing is likely due to its antioxidant properties. Genistein is a potent antioxidant and has been shown to reduce 8-hydroxy-2’-deoxyguanosine (8-OHdG) formation (a product of DNA oxidation), scavenge hydrogen peroxide and superoxide anion26 and induce increased activity of antioxidant enxymes, such as SOD, catalase and glutathione reductase.27 In an in vivo study, pretreatment with genistein resulted in inhibition of cjun, the heterodimer of AP-1, which stimulates the breakdown of collagen via enhanced MMP expression. This resulted from genistein’s antioxidant activity, particularly its inhibition of the ERK and JNK MAP kinases that activate AP-1.10 Soybeans have also been shown to reduce the clinical signs of aging by inducing elastin promoter activity