Abstract
.
Bowenoid papulosis (BP) is an uncommon squamous intraepithelial neoplasia, which manifests as an eruption of flesh colored or hyperpigmented verrucous papules that may become confluent plaques, involving the genitalia and anogenital regions.
A 39-year-old Chinese gentleman with a past medical history of Human Immunodeficiency Virus (HIV) infection on antiretroviral therapy, presented to our center with a one-year history of biopsy proven BP. Physical examination revealed widespread disease with multiple hyperpigmented verrucous papules, patches and confluent plaques over the perianal area (Figure 1).
Given the extent of his disease, conventional therapy with liquid nitrogen and topical 5% imiquimod would necessitate multiple treatments; the patient was commenced on oral acitretin 25 mg daily (0.38 mg/kg/day) in combination with topical 5% imiquimod, to be applied every alternate day. His BP regressed after eight weeks of treatment to flattened pigmented patches. No adverse effects were reported. His medication was tapered with continued clinical response to a maintenance regime of oral acitretin 25 mg three times a week and topical 5% imiquimod twice a week. After 6 months of treatment, the lesions had cleared with post-inflammatory depigmentation (Figure 2).
Bowenoid papulosis is associated with infection by oncogenic human papillomaviruses (HPV),1 which spread by skin-to-skin contact during coitus. BP typically runs an indolent course with the risk of malignancy reported to be at 1%.2 Histologically, BP is characterised by acanthosis with full-thickness dysplasia, making it challenging to distinguish from other variants of squamous carcinoma in-situ. Hence, the diagnosis is clinched by establishing a clinicopathological correlation.
The treatment for BP is conservative as it usually regresses spontaneously. For persistent, extensive or symptomatic lesions, therapy is similar to the options for condylomata acuminata, which is directed at local destruction via keratolysis (eg, podophyllotoxin), immunomodulation (eg, topical 5% imiquimod and 5% 5-fluorouracil), cryotherapy ablation, photodynamic therapy (PDT) or other surgical methods (eg, laser or electrocurettage). 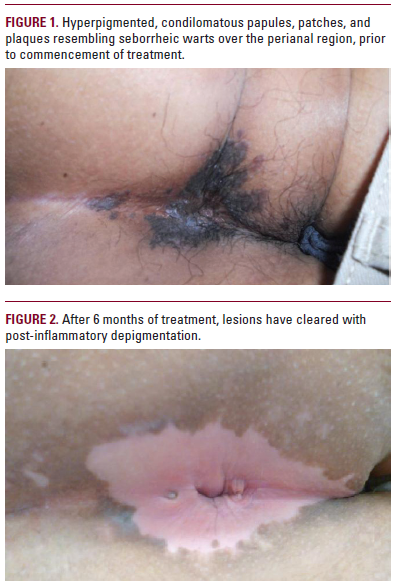 BP’s link to HIV infection is two-fold; patients with HIV infection are at higher risk for developing BP from exposure during sexual contact; there is a greater risk of malignant transformation of BP due to their concurrent immunocompromised state. In light of the latter, BP in HIV patients need to be managed with urgency through regular post-treatment checks monitor for disease recurrence. Our patient’s CD4 count at therapy initiation was 178 cells/mm3 (reference interval 500 – 1000 cells/ mm3) indicating immunodeficiency.
Therapeutic options for our patient were limited as he was not keen for surgery. Sole application of topical therapies, though proven to be effective in BP in HIV patients,3,4 may cause discomfort owing to the development of ulcerations at the sensitive anatomical area of affliction. Moreover, an immunosuppressed constitution may engender treatment failure when imiquimod5 is used to achieve immunomodulation. PDT is a viable option