Abstract
Basal cell carcinoma (BCC) is the most common cutaneous malignancy, and usually presents on sun-exposed areas of the skin. Unsurprisingly, BCC appearing on the nipple-areola complex (NAC) is rare, and even more so in females and dark skin types. BCC of the NAC is more aggressive than other locations, thus diagnosis and treatment are imperative. We present a case of an African American female with a lichenified, scaly plaque on her left areola that was unresponsive to clobetasol. After biopsy, the lesion was identified as pigmented BCC of the NAC. The patient denied surgical treatment and was treated with topical 5-fluorouracil. The BCC initially resolved but recurred at 22 month follow-up. We plan to treat the recurrence with Mohs surgery.

A 66-year-old African-American female presented with a two centimeter lichenified, scaly, and excoriated plaque on the left areola (Figure 1). The asymptomatic plaque had been present for less than one year. Palpation revealed minimal substance without other associated physical findings. It failed to improve after two months of treatment with clobetasol 0.05% ointment. The patient reported a negative breast ultrasound and mammogram in the recent past. Biopsy revealed pigmented basal cell carcinoma of the superficial subtype with overlying epidermal excoriation (Figures 2-3).
Basal cell carcinoma (BCC) is the most common skin malignancy with numerous intrinsic and extrinsic factors that contribute to its pathophysiology.1 A major etiologic factor in BCC is believed to be ultraviolet radiation, correlating with the fact that BCC frequently presents in sun-exposed areas such as the head and neck.2
We present a case of BCC associated with the nipple areola complex (NAC) in an African-American female. BCC of the NAC is rare, with 33 cases presented in the literature.3 Only 13 of these cases are in female patients, likely due to decreased truncal sun exposure in females.3,4 BCC of the NAC is even rarer in dark skin types. In published cases of BCC of the NAC in females, the demographics and photographs suggest Caucasian patients. However, some articles do not indicate demographic data for their patients. Thus, to our knowledge, this is the first case of BCC of the NAC reported specifically in an African-American female. 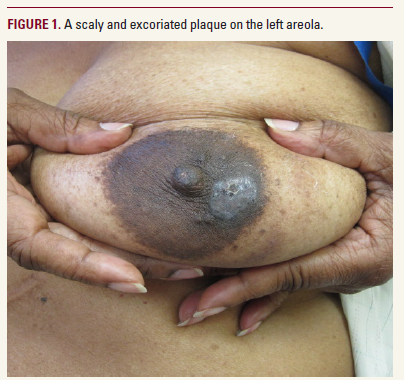 Our patient used 5-flourouracil twice daily for six weeks after declining imiquimod or any surgical procedure. The BCC initially resolved clinically and was followed with regular skin exams.