Abstract
Vemurafenib is a recently approved targeted therapy for advanced melanoma harboring the B-Raf valine-to-glutamate mutation at residue 600 (V600E). In many patients, the use of vemurafenib leads to a rapid onset of cutaneous neoplasms, including squamous cell carcinomas, keratoacanthomas, and benign keratoses. Paradoxical activation of the mitogen-activated protein kinase (MAPK) pathway by vemurafenib in the setting of RAS hyperactivation has been demonstrated in the laboratory and may account for the pathogenesis of some of these neoplasms. Activating RAS mutations have been discovered in vemurafenib-associated squamous cell carcinomas, but have not been reported in benign keratoses, which are a more common side effect that affects patient quality of life. Here, we report on the mutational analysis of RAS genes at known activating hotspots in verrucous keratoses from a stage IV melanoma patient undergoing vemurafenib therapy. The results lend genetic evidence to the current hypothesis for how some of these lesions develop and suggest potential strategies in the research on preventive and therapeutic measures.

A new generation of anticancer pharmaceuticals designed to inhibit specific malignancy-associated enzymes has become available in recent years. Vemurafenib represents one such medication and targets the V600E-substituted B-Raf protein, which may be found in 40 to 60% of melanomas.1 Though shown to be clinically efficacious in advanced melanoma treatment, vemurafenib produces cutaneous side-effects in some patients, including squamous cell carcinomas, keratoacanthomas, palmar-plantar keratoses, keratosis- pilaris-like eruptions, and verrucous keratoses.2 Studies into the pathogenesis of these lesions have focused on alterations in the mitogen-activated protein kinase (MAPK) pathway, in which B-Raf participates. Biochemical and cell culture studies have identified a mechanism by which wild-type B-Raf, in the presence of vemurafenib and an oncogenic RAS, paradoxically upregulates the pathway.3 Such RAS mutations at hotspot codons (12, 13, and 61) have been identified in a high percentage of squamous cell carcinomas from vemurafenib-treated patients4 but have not been demonstrated in the spectrum of benign verrucous keratoses. In addition, many of the keratoses observed in vemurafenib-treated patients appear similar to lesions observed in cutaneous syndromes associated with RAS mutations, such as cardiofaciocutaneous syndrome, Costello syndrome, and Noonan syndrome.5 In order to further characterize these keratoses, we genotyped RAS orthologs KRAS and NRAS at hotspots associated with oncogenic activation in three of these lesions from a vemurafenib-treated melanoma patient.Three verrucous keratoses, which had been previously biopsied from the face (Figure 1) and back of a 41-year old woman with stage IV melanoma, were analyzed. The patient had begun taking vemurafenib 960 mg twice daily one month before presenting with these lesions. DNA from formalin-fixed paraffin-embedded tissue was PCR-amplified at the regions of KRAS and NRAS codons 12, 13, and 61. Pyrosequencing (PyroMark System by Qiagen) was performed on the DNA to detect mutations at these sites. Wild-type and known mutant DNA were used for controls. In addition, BRAF codon 600 was also sequenced. PyroMark software was used to calculate percentage mutation of each nucleotide when detected. This study was performed in compliance with the Western Institutional Review Board (Olympia, WA). 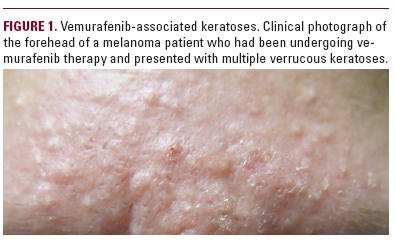