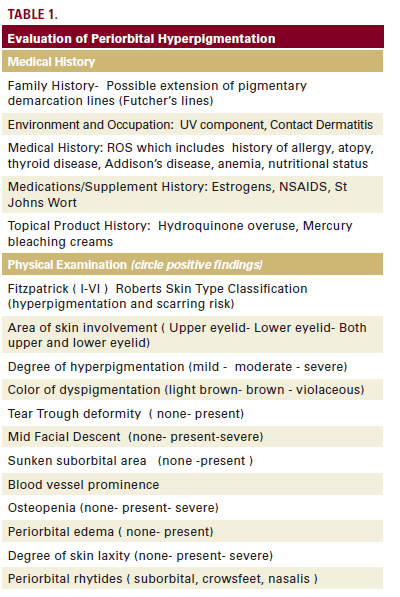 cosmeceuticals. While there are many treatment possibilities for a specific case of POH, in this article, five cases are reviewed with a different aesthetic treatment modality. They include microdermabrasion, injectable filler, chemical peel, and fractional photothermolysis as monotherapy without topical HQ and fractional photothermolysis as combination therapy with topical HQ. A worksheet is offered to assist in the evaluation of POH.

POH is a benign disorder that may have a heredity component. Goodman and Belcher reported many families with several family members with varying degrees of periorbital pigmentation. Some were mildly affected and some severely affected.13
The etiology of POH may be multifactorial however, importantly for clinicians it may be a sign of an underlying systemic disorder, allergic reaction, nutrition, or sleep disturbances. Gupta had evaluated the prevalence of dissatisfaction with skin appearance of 32 women with eating disorders compared with 34 healthy controls and found that 9% of those below 30 years of age were not satisfied with their under eye dark circles against 38% of women with eating disorders.14 Periorbital dermatitis may be a precursor to PIH and POH. Landeck et al reported on a study that consisted of 266 patients affected by periorbital dermatitis. This entity showed significant predominance of female gender (87.6%) and of individuals aged 40 to 59 years (45.9%). Nickel (16.5%) and fragrance mix (13.2%) were the top-ranking sensitizers. Patch testing confirmed the likelihood of allergic contact dermatitis in 50.8% of the dermatitis patients tested.15 Idiopathic cutaneous hyperchromia of the orbital region has been described as a subset of POH defined with no associated systemic or local disease such as PIH, contact dermatitis, or systemic component.16 Using spectrophotometric intracutaneous analysis (SIA) Verschoore et al analyzed and quantified melanin and hemosiderin concentration in this disorder.17 It has been proposed that idiopathic cutaneous idiopathic hyperpigmentation (ICHOR) is an extension of the pigmentary lines of demarcation also known as Futcher’s lines.18 In a study by Malakar et al, 100 Indian patients with a diagnosis of POH were evaluated. Their results showed that in 92% of study patient’s periorbital melanosis was an extension of pigmentary demarcation line over the face. They concluded that in this population, periorbital melanosis and pigmentary demarcation lines of the face are not two different conditions, rather they are two different manifestations of the same disease.18 In an effort to classify POH, Ranu et al examined 200 patients from Singapore with the diagnosis of POH. They were evaluated with medical history, clinical examination, mexameter reading, and physician assessment, by three dermatologists. The authors found 4 basic types: 41.8% was the vascular type (characterized by presence of erythema predominantly involving the inner aspect of the lower eyelids, with prominent capillaries or telangiectasia or the presence of bluish discoloration of the lower eyelid due to visible blue veins that became more prominent when the overlying skin is stretched; 38.6% were considered constitutional, which was characterized by the presence of a curved band of brownish to black hyperpigmentation of the lower eyelid skin along the shape of the orbital rim with velvety texture, often involving the upper eyelids; 12% were called post-inflammatory hyperpigmentation; and 11.4% characterized as shadow effects due to anatomical deformities such as tear trough deformity and fat herniation. There were other cases of POH that were deemed due to other causes like skin laxity, dry skin, hormonal disturbances, nutritional deficiencies, and other chronic systemic illnesses.19 Most recently, in an effort to analyze and classify dark eye circles (DEC), Huang et al examined 65 cases of DEC and classified their results as pigmented, vascular, structural, and mixed types. In addition, they identified 33 cases with “periorbital puffiness” as patients with higher “pre-septal thickness” then the 20 controlled cases as determined by ultrasonagram and Wood’s lamp.20 POH may be the earliest sign of periorbital aging with concomitant skin and musculo-ligamentous laxity, increasing vascular show, and osteopenia of the periorbital osseous structures.21 It must be differentiated from other benign disorders of hyperpigmentation