News, Views, and Reviews: WHO's Who in Tropical Diseases

Abstract
.
The World Health Organization (WHO) maintains a list of 17 neglected tropical diseases,1 defined as “a medically diverse group of infections caused by a variety of pathogens… [that] pose a devastating obstacle to health, frustrate the achievement of the health-related United Nations Millennium Development Goals, and remain a serious impediment to poverty reduction and overall socioeconomic development”.2 While uncommon in developed countries, dermatologists should nonetheless be prepared to recognize these conditions, many of which present with primary and/or secondary cutaneous changes. International travel is increasingly common and brings with it a higher likelihood for clinicians to encounter diseases once thought to flourish only in comprehensive textbooks and isolated corners of the world. This is no longer the case, and accurate diagnosis and prompt initiation of treatment may be required to prevent significant morbidity and mortality. This review covers five neglected tropical diseases: dengue fever, lymphatic filariasis, onchocerciasis, leishmaniasis, and leprosy.

Transmitted by the bite of the Aedes aegypti mosquito (Figure 1), dengue fever is the most significant arthropod-borne viral illness affecting humans. Worldwide, there are 50-100 million infections estimated per year. 2.5 billion people are thought to be at risk, primarily in tropical and sub-tropical countries. There are four dengue RNA viruses (DENV1-4), each of which possesses unique antigenic diversity; accordingly, sequential infection is known to occur. No satisfactory animal model for dengue yet exists, and there remains a wide knowledge gap pertaining to pathogenesis.3-5
Dengue should be considered in anyone presenting with a febrile illness within 14 days of returning from any tropical or subtropical region. The differential diagnosis is wide given the spectrum of disease, which ranges from asymptomatic to mild febrile illness to severe, potentially fatal disease.3,4,6
Classic dengue fever should be suspected in cases of abruptonset high fever (>104°F) along with any two of the following:
myalgias or arthralgias, retro-orbital pain, severe headache, nausea, vomiting, lymphadenopathy, or rash. The classic exanthem of dengue, estimated to occur in 50-82% of patients, begins with flushing erythema of the face, neck, and chest within the first 24-48 hours of symptom onset. 3-5 days later, a generalized morbilliform eruption occurs, with petechiae and islands of sparing (“white islands in a sea of red”). Laboratory findings may include leukopenia, thrombocytopenia, hemoconcentration, hyponatremia, and elevated liver function tests. Classic dengue fever is self-limiting and symptoms usually last 2-7 days after a 4-10 day incubation period.3-6
Classic dengue may progress to become severe dengue, which was formerly divided into two conditions now considered jointly: dengue hemorrhagic fever and dengue shock syndrome. Severe dengue is potentially fatal owing to plasma leakage resulting in shock, accumulation of fluid, severe bleeding, respiratory distress, and organ impairment.4,5 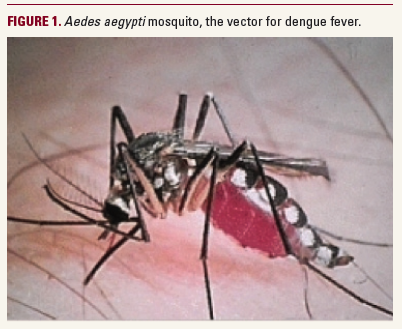 Despite several clinical trials, there are no specific drugs available for dengue, and treatment is supportive (eg, fluid maintenance). Efforts at vaccine development are under way but no licensed vaccine is currently available. Vector control is the core preventive method but has not been effective to date. Patients should be informed about individual preventive measures, such as protective clothing and insect repellent, prior to visiting endemic areas.3,4,6