Treatment of Margin Positive Basal Cell Carcinoma With Vismodegib: Case Report and Consideration of Treatment Options and Their Implications 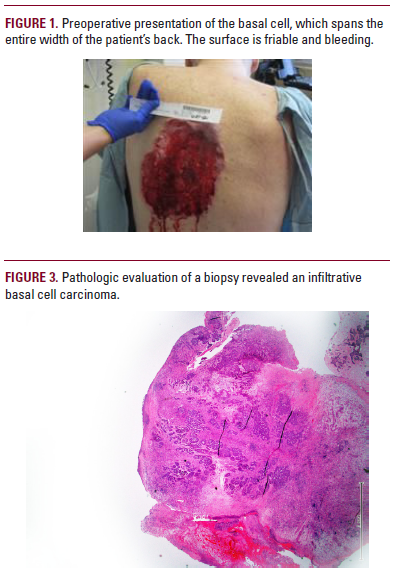 Alternatives to surgery, including radiation and topical imiquimod, were considered. Given the extensive size of the tumor and the dose of radiation required with proximity to the spinal cord, radiation would pose significant risk to the central nervous system. Topical imiquimod was considered inappropriate because it would likely be ineffective for such a deep tumor.
During surgery, it became apparent that the size and depth of the tumor were substantially greater than initially appreciated via CT scan and that the tumor had infiltrated into the spinous processes of multiple vertebrae (Figure 4). Alternatives for treatment included complete resection of the affected spinous processes or termination of the surgical procedure. Because of the length of the procedure and the involvement of multiple vertebral levels, it was elected to terminate the resection and reconstruct the defect using left and right paraspinous muscle flaps as well as right and left latissimus dorsi flaps. A second stage operation was performed for skin graft closure over the muscles.
The patient had an uneventful recovery and his surgical site healed without any complications. Treatment options for the patient were discussed based on the depth and location of the tumor. These included radiation, observation, additional surgery with neurosurgical participation, or treatment with an oral Hh inhibitor, such as vismodegib. 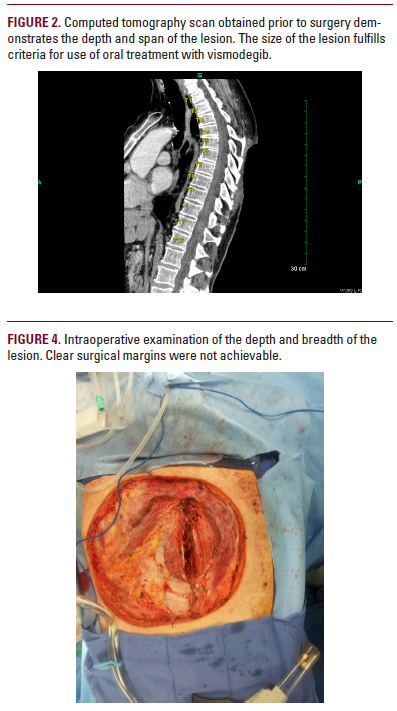 After consultation with an oncologist and a dermatologic surgeon, it was decided to initiate treatment with vismodegib at 150 mg per day.
After using vismodegib for approximately 3 months, the patient elected to discontinue this treatment due to adverse events (AEs), primarily lethargy and dysgeusia. He was subsequently evaluated by radiation oncology and treated with radiation; the risk of radiation injury to the spinal column at this point was determined to be less than the risk of leaving the remaining