Although few randomized controlled trials have studied the clinical efficacy of oral antibiotics in acne, tetracycline and erythromycin have been shown to reduce inflammatory lesions by 64% and 67%, respectively.2 Other comparative studies have typically shown few or no important differences in clinical efficacy between the oral antibiotics. A recent Cochrane meta-analysis concluded that minocycline is effective for moderate acne, but data are insufficient to compare its efficacy to that of other acne therapies.22
Tetracyclines, macrolides, and trimethoprim-sulfamethoxazole can be used to treat moderate to severe acne.14,19 Whereas long-term therapy is commonly used, short courses may be effective and may reduce the risk for development of antibiotic resistance.15
Alternatively, topical BP is a relatively inexpensive agent that is proven bactericidal against P acnes with no known risk of resistance.

The Reemergence of Benzoyl Peroxide

Lincosamide antibiotics such as clindamycin and macrolide antibiotics such as erythromycin have a similar method of action, inhibiting the protein synthesis of P acnes by attaching to the 50S subunit of the bacterial ribosome.23 In contrast, BP’s mechanism of action does not involve bacterial ribosomal synthesis. Benzoyl peroxide is a potent oxidizing agent. By generating reactive oxygen species that physically interact with constituents of the bacteria, it exerts a bactericidal effect.
Combining BP with a topical antibiotic in a stable formulation has been proven in clinical trials to reduce total P acnes count by 99.7% after 1 week of therapy, eliminating both susceptible and resistant strains of P acnes.24 Clinically, combination therapy with BP and a topical antibiotic has been proven to prevent the emergence of resistant strains of P acnes. For this reason, the current clinical recommendation is to include BP in topical anti-acne regimens to preclude the development of antibiotic resistance.15
Benzoyl peroxide’s efficacy as a monotherapy was traditionally considered to be limited; however, the agent is readily used in fixed-dose combinations with antibiotics or topical retinoids, providing documented benefit.25-27 For example, the fixed-dose combination of adapalene 0.1%/BP 2.5% was associated with early improvement in quality of life and high levels of treatment satisfaction among treated patients compared with control subjects. 26 In clinical trials, adapalene/BP combination gel showed a significantly higher success rate (P<.006 or P=.006) and a greater percentage reduction in all acne lesion counts (P<.017 or P=.017) compared with adapalene or BP monotherapy.27
We are also now noticing BP’s benefits as monotherapy in the treatment of acne. The effect of BP on P acnes is rapid. After just 2 days of treatment with BP 5%, an almost 2-log10 decrease in P acnes counts was observed. No further decrease was observed at subsequent times.28
Lee et al found that P acnes synthesizes coproporphyrin III, producing the well-known orange-red follicular fluorescence under 385-nm to 415-nm light.29 Benzoyl peroxide’s activity against P acnes was demonstrated in an elegant study using 385-nm to 415-nm light fluorescence.30 When subjects with acne were treated with BP 10%, P acnes counts were significantly lower compared with untreated controls both at day 3 (P=.007) and at day 7 (P=.0001). Researchers also cultured P acnes from subjects and showed that a decrease in cultured P acnes density in the treated group paralleled the dramatic decrease in porphyrin fluorescence. Of note, documented recolonization of P acnes 10 days after stopping BP was matched by a corresponding reappearance of porphyrins.30 Because the intensity of fluorescence is proportional to the density of P acnes and decreases with BP treatment, digital fluorescence photography was selected as a reliable, noninvasive method to estimate the suppressive effects of BP 10% on P acnes.30
Thirty healthy adults with high facial P acnes counts (>10 colony-forming units/cm2 from the forehead) were recruited for a 4-week, single-center, open-label study.31The study sought to assess the presence of P acnes subpopulations resistant to erythromycin, tetracycline, and clindamycin before and throughout the course of treatment with the BP 2.5% and adapalene 0.1% fixed-dose combination. Subjects were instructed to apply adapalene 0.1%/BP 2.5% gel to the forehead once daily for 4 weeks. Cultures were taken at screening, baseline, week 2, and week 4. P acnes counts were high at baseline but reduced significantly by week 4 (Table 2.) Total P acnes were reduced by a mean 80% at week 2 and 93% at week 4. Erythromycin-resistant strains were reduced by 89% and 97%, clindamycin-resistant strains by 82% and 92%, tetracycline-resistant strains by 79% and 92%, minocycline-resistant strains by 85% and 97%, and doxycycline-resistant strains by 67% and 88%, respectively at week 2 and week 4. The authors acknowledge that their study was limited in scope; however, results demonstrate that the fixed-dose combination gel containing adapalene 0.1% and BP 2.5% effectively inhibited both antibiotic-susceptible and antibiotic-resistant P acnes.31 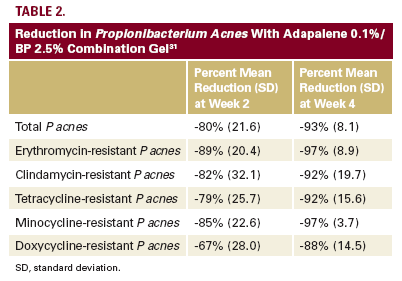