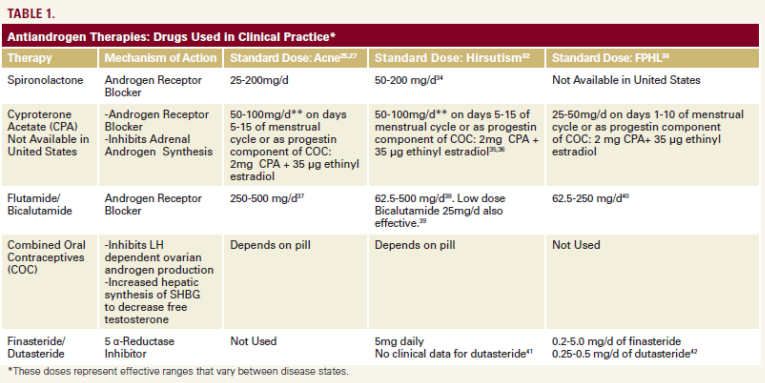 in follicular hyperkeratinization.18 Acne formation occurs at the time of rising levels of DHEA-S, which was found to correlate with acne severity in prepubertal girls.19 Both 5α reductase type I and 17B HSD types 3 and 5 were reported in sebaceous glands from facial areas prone to acne as compared to non acne prone areas, which suggests that local androgen biosynthesis contributes to acne development in those areas.20 However, though androgens are associated with the evolution of acne, androgen levels are not directly correlated with acne severity.21 The exact mechanism by which androgens regulate sebocyte activity is still unknown.8 It has been proposed that AR binding to macrophages and neutrophills enhances the inflammatory milieu necessary for acne formation.22 Alternatively, IGF-1, one of the androgen receptor target genes, was shown to induce STREBP-1 expression and lipogenesis in sebocytes.23 Like DHEA-S, IGF-1 is increased during puberty and controls androgen activity in the skin via phosphorylation of the AR corepressor, FOXO1, which then releases its inhibition on AR translocation.24 Accordingly, patients with Laron syndrome, an inherited IGF-1 deficiency, do not develop acne or hirsutism unless sufficient replacement therapy is initiated. High glycemic load and dairy products increase the expression of IGF-1 and may partially explain the clinical association between diet and acne.23
Hormonal therapy for acne is not typically first-line but is indicated in women who desire contraception, those with clinical hyperandrogenism or proven ovarian/adrenal hyperandrogenism, and those who fail to be controlled on repeated isotretinoin courses. Hormonal therapy seems to have greatest efficacy on acne tarda in women and sexually active teens with premenstrual flares25 and is effective even in the absence of hyperandrogenism. It is rarely used as a monotherapy as current guidelines recommend the use of combination therapy with an oral antibiotic, topical retinoid or benzoyl peroxide to target as many factors of acne pathogenesis as possible.26 Of all available options, combined oral contraceptives (COC) and spironolactone are the most widely used hormonal agents.27 A recent Cochrane review of the effectiveness of combined oral contraceptive (COC) therapy for acne found all formulations equally effective in reducing inflammatory and noninflammatory acne lesions. Due to the structural similarity between androgens and progestins, certain progestins have pro-androgenic activity that, overall, is still outweighed by the countering estrogen. However, the use of newer fourth generation progestins, drospirenone and cyproterone acetate (not available in the United States) is clinically recommended as they are not derived from testosterone and function as full androgen receptor antagonists. Nonoral COC’s have not been studied and only three COC’s are FDA approved for the treatment of acne.28,29 Spironolactone has shown improvement in 50-100% of treated women at doses of 100-200mg/d.30 However, doses as low as 25mg once or twice daily have been cited as effective based on clinical experience with the advantage of less toxicity.27 Targeted enzyme therapy utilizing selective type I 5a reductase inhibitors has not shown significant improvements in acne in both clinical and in vitro studies.31 This suggests that DHT in particular may not be the primary androgen involved in acne formation.

Hirsutism is the excessive growth in females of sexual hair in a male pattern distribution.14 The role of androgens in disease pathogenesis is unequivocal as sexual hair growth is entirely mediated by androgens. Local overproduction of androgen and increased sensitivity of the AR are the two accepted theories of disease pathogenesis. However, most women with hirsutism