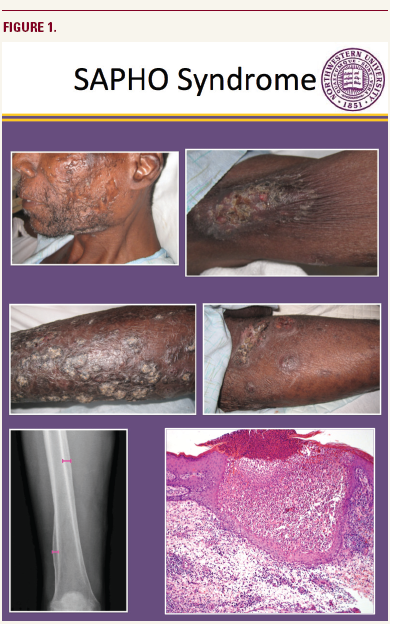 acne fulminans or hidradenitis suppurativa. Pyoderma gangrenosum, Sweet’s syndrome and other neutrophilic dermatoses can also be seen. Osseous involvement can range from osteitis with sclerosing features to hyperostosis with cortical thickening resulting from chronic periostal reaction. Erosive arthritis can also occur. Osteoarticular manifestations most commonly involve the anterior chest wall, especially the sternocostoclavicular region, but can also involve the spine, pelvic girdle, sacroiliac joints, peripheral joints, long bones or mandibles. These osteoarticular changes are best characterized by total body scintigraphy, but plain radiographs, computed tomography and magnetic resonance imaging studies can also be alternatives.
The pathogenesis of SAPHO syndrome remains poorly understood but likely involves infectious, genetic and immunologic mechanisms. A pathogenic role of Propionibacterium acnes (P. acnes) causing a reactive osteitis in genetically predisposed individuals has been proposed since the microbe has been isolated from bone biopsy specimens. However, it remains unclear if the osteoarticular changes seen in SAPHO syndrome are directly related to P. acnes. Associations with inflammatory cytokine overproduction and neutrophil dysfunction have also been reported.
SAPHO syndrome generally has a chronic and protracted course; however, the severity of the symptoms can vary greatly from person to person. Given the rarity of the disease and the lack of large controlled studies, treatment remains empiric to date. Non-steroidal anti-inflammatory agents and analgesics generally provide only modest improvement. Bisphosphonates can be used given their anti-inflammatory effects and their inhibition of bone resorption and turnover. Antimicrobial agents may be considered given the suspected role of P. acnes, but their efficacy remains anecdotal. Recently, treatment with TNFalpha inhibitors and interleukin-1 receptor antagonists has shown promise for refractory cases.

None of the authors have disclosed a conflict of interest.