Three studies were performed to investigate whether this formula would be valuable in the management of rosacea-prone skin.

Three studies were performed to evaluate the efficacy of the test formula in different therapeutic regimes: the first as monotherapy, the second either as monotherapy or as adjunctive therapy and the third as maintenance treatment.

The test formula contained Ambophenol, Neurosensine, and La Roche-Posay thermal spring water in a vehicle base. This base was also used as the control. The formula contained no preservatives, parabens, alcohol, fragrances or colorants. The hermetic packaging was designed to protect the product from microbial contamination.

Each study protocol complied with the ethical guidelines of the 1975 Declaration of Helsinki, was approved by an ethical committee and was conducted according to ICH guidelines for Good Clinical Practice. Informed consent and photography consent were obtained from each subject before enrollment.
Study 1: Healthy, female volunteers between 18 and 45 years of age with diagnosed added stage 2 erythro-couperosis were included in this open controlled study. Patients applied the test formula on their full face twice a day for 4 weeks (after cleaning). The investigating dermatologist clinically evaluated redness and telangiectasia at baseline, 4 weeks, and then 1 week after stopping the treatment. Redness intensity and telangiectasia were evaluated using a visual analog scale (VAS) ranging from 0 (no symptoms) to 9 (intense symptoms).
Study 2: Adult volunteers with stage I or II rosacea were included into this open controlled study. At baseline, a dermatologist questioned the patients on their skin condition. This information was collected using a questionnaire containing questions about patient characteristics, tolerance, clinical signs, symptoms and skin reactivity to “trigger factors”. The test formula was prescribed to each patient as either monotherapy for 117 patients with stage I rosacea or as adjunctive therapy for 433 patients with stage I or II rosacea. After 2 months treatment, the dermatologist administered the same questionnaire and each patient completed a self-questionnaire about physical (8 questions), social (10 questions) and psychological (11 questions) impairments.
Study 3: This single center, randomized, double-blind, vehicle controlled study included 65 patients finishing an 8-week Metronidazole treatment applied once daily (evening) (67 were enrolled before the beginning of treatment). Patients applied test formula or vehicle twice a day for 8 weeks. The investigating dermatologist clinically evaluated the tolerance and the evolution of rosacea. 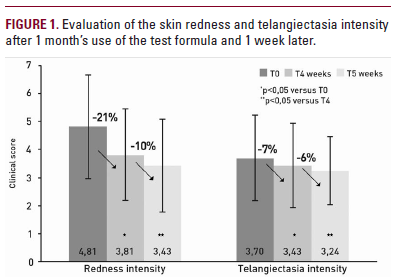 Evaluation of Efficacy on Redness in Monotherapy

37 healthy women volunteers with erythro-couperosis aged between 18 and 45 years were enrolled in this study. Figure 1 shows the significant efficacy of the test formula on redness and telangiectasia intensity following 1 month’s use on erythro-couperosic skin. Efficacy was prolonged 1 week after the end of treatment (T5 weeks). An excellent tolerance and an efficacy confirmed by patients who appreciated the product (for example 82% thought the texture was pleasant and 98% noted that the product was easily applied).

117 patients (20% M and 80% F), mean age 50 ± 13 years (20-80), mainly skin type II (61%) and III (23.5%) with a stage 1 rosacea completed the study. At the first visit the main clinical signs recorded were erythema, telangiectasia, flushes, dryness and feeling of tightness (Figure 2). At the 2nd visit, 2 months later, dermatologists noticed a significant improvement in all clinical signs and symptoms (reduction of -38%, P<0.0001) (Table 1), particularly skin dryness and feeling of tightness (Figure 2). Additionally, at the first visit the main “trigger factors” recorded were sun, intense physical exercise, heat and wind. At the 2nd visit, dermatologists noticed a significant reduction of the skin reactivity to trigger factors (-38%, P&lt0.0001) (Table 1 and Figure 3). The social impact of the disease was not as important as the physical and psychosocial impacts. Nevertheless, all these impairments significantly improved between the 2 visits (P<0.05) (data not shown).