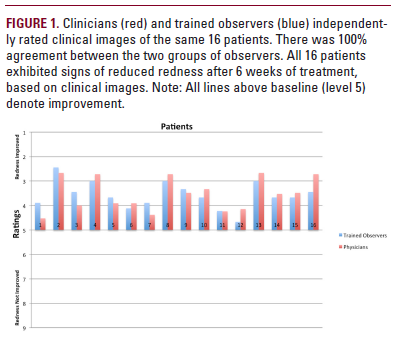 All subjects completed the study. Adverse effects were not observed in any subject. Two sets of images were evaluated. One set were clinical photos, the other spectrally enhanced red images that were computer generated by the Canfield software. The sets of observers evaluated the before and after images independently. During their evaluations there was no inter-observer discussion. There was 100% agreement between the groups as to which patients improved and which did not. Improvement once attained was sustained throughout the course of the study. The data suggest that 3 to 6 weeks may be sufficient time for most subjects to achieve a reduction score of 2 to 4. (Note added in proof: most of the patients have now been informally followed for more than 1 year and have maintained their improvement.)

As has been said, now that we know it works in fact, how does it work in theory? The product that reduced facial redness is a combination of a number of products produced by mother nature that each has individual histories of providing benefits by association with epidemiologic data. Uniquely these products are associated with a plethora of benefits but a noticeable absence of deleterious effects. Scientists, including our own group, have studied these molecules in test tube and animal models and drawn lots of conclusions about the nature of their activities. Discussed here are some of our favorites, but do they answer the question of how this product produces its admirable effects? Historically the first product that we evaluated clinically contained just green tea polyphenols. Note that this is was a concentrated assortment of all the molecules available from gentle extraction and concentration of the green tea leaf, intentionally not focusing on any single component as the epidemiology of benefits is for green tea and not individual components. This product was cosmetically accepted and conceptually was a potent topical antioxidant. Clinical observation suggested it had a calming effect on the users’ skin, including those with inflammatory dermatoses, suggesting its anti-inflammatory nature. Our laboratory found that the addition of caffeine increased the antioxidant capacity of green tea polyphenols in a test tube model using human fibroblasts. Caffeine had already been administered topically and was being redeemed as systemically beneficial and therefore might add to the antioxidant qualities of our existing product. Back in the lab, resveratrol had proven to have antioxidant capacities and some other unique activities.12 Guided by this laboratory data and an excellent epidemiology story, we added resveratrol producing a unique product in which all of these components were present in high concentrations in a stabilizing base. Each translation from bench top to commercial product has a period in which the older product is compared to the new for cosmetic acceptability. Everyone liked the qualities of the new product and we noticed that in those individuals with facial redness, the side treated with the resveratrol addition had reduced redness. Translational work is thought of as from the bench to the bedside but clinical observation yields facts and what remains is why. 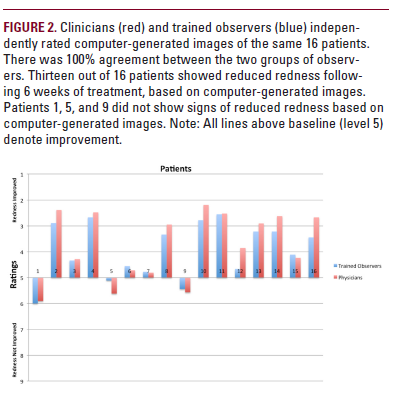 A suggestion for the mechanism of action of this combination product centers on the concept that individual cells in an environment, in this case the skin, produce molecules that influence all the surrounding tissues and on some level the host.13 This is now a more accepted doctrine in the cancer literature and recently in the aging literature.14 The data presented here on redness in the skin may be explained by having the mixture of active principles in this product change how individual cells